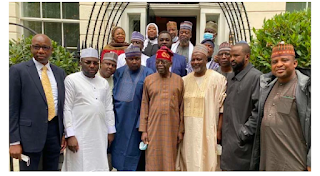 Amid the rumoured presidential ambition of former Lagos State governor and National Leader of the ruling All Progressives Congress, Asiwaju Bola Tinubu, members of the House of Representatives from the north have endorsed his candidacy for 2023 presidency, Sunday PUNCH has learnt.

Though Tinubu has yet to declare his intention to contest any office in 2023, there have been rumours and veiled indications that he might be interested in the exalted seat.

A delegation of the northern caucus in the House, led by the Deputy Speaker, Ahmed Wase, had on Friday visited Tinubu in London where he has been receiving treatment for the last three months.

A member of the delegation told one of our correspondents on condition of anonymity that the visit was to endorse Tinubu for President.

The lawmaker said, “We in the North (House of Representatives caucus) are kind of endorsing his candidature because he is a national leader and you know that he is aspiring (allegedly). Whether you like it or not, he wants to be President of this country. So, we felt that if the northern caucus of the National Assembly – in the House of Reps – would come to see how he is recuperating, we thought that it would mean so much.

“He really appreciated our coming because he said he rated our coming second after the visit of President Muhammadu Buhari. He mentioned that governors and others came but this is a mini Nigeria in the House of Reps, for the entire northern caucus to find time to come and see how he is faring.

“He stood up and walked. I’m sure you have seen the video. I think he has recovered; he is not doing badly at all – this is not politics. I think because of his age, he has to still go for physiotherapy and things like that. These are things that will take time for him to fully do some politicking. He will soon come back to Nigeria.”

Meanwhile, in one of the videos from the visit, which has gone viral on the Internet, the lawmaker representing Guevara/Suleja/Tafa Federal Constituency in Niger State, Lado Suleja, called Tinubu “Mr President.”

The lawmakers were seen accompanying Tinubu to a waiting car, during which Suleja said, “Mr President, see you soon,” and the ex-governor replied, “Thank you.”

Speaking on the visit, the source added, “I will not say he is speaking for the caucus. Lado is his loyalist. He has been Tinubu’s loyalist for a long time, we know that. It was Lado that made that statement. All of us – even me – wish he is our President.”

When asked to confirm Asiwaju’s endorsement, Ado-Doguwa stated that it was a ‘get-well visit.’

He said, “I am neither the leader of the delegation nor come as the Northern Caucus, perhaps not the right person to answer your question. But on a personal note, I can tell you that I was on this mission to simply pay a ‘get-well visit’ to the National Leader of our party, the APC, like many other Nigerians have done, including Mr President. My religion and tradition allow for such visits to the sick.

“I, therefore, stand bold to say that I wish Bola Ahmed Tinubu well and pray for his fast recovery. I am further glad to say that  I met him in an improved and very encouraging health Condition.”

Meanwhile, in another video, the former governor said he was healthy but only undergoing physiotherapy in London. He said this while addressing the northern caucus.

Tinubu, who was dressed in Kaftan and a red cap, has been in the United Kingdom for about three months after undergoing knee surgery. He however described the physiotherapy as gruesome. “Because of God and people like you, I am well. It is just the physio (physiotherapy) that is gruesome,” he added.

Tinubu’s health had become a subject of controversy of late but in a statement on July 31, 2021, his Media Adviser, Tunde Rahman, said though the former governor was out of Nigeria, he was not hospitalised as claimed by some persons.

“He (Tinubu) is out of the country at the moment. He will be back shortly,” he said, adding that his boss was “hale and hearty”.

Akeredolu and Fayemi had said their visit was not about 2023 but to pay him a courtesy visit. Meanwhile, Akeredolu added, “He’s the capo (di tutti) for us here. By the time he comes, we can make some important decisions.”

Similarly, when asked in an interview if Tinubu discussed his plans for 2023 with him, Gbajabiamila said his discussion with the APC leader “was privileged”.

His long stay abroad has however drawn criticism from some Nigerians who argued that his prolonged medical trip was not a good signal if indeed he planned to become the president.

Reno Omokri, a former aide to ex-President Goodluck Jonathan, had said should Tinubu become President in 2023, he would continue Buhari’s tradition of seeking treatment abroad at the expense of taxpayers.

In recent years, the UK has become a choice destination for the Nigerian elite including Buhari, who frequent London for medical tourism while perpetual industrial actions, lack of modern equipment, inadequate personnel, failure of government to pay doctors’ salaries, amongst others, mar Nigeria’s health sector.

In a related development, the chairman, South-West Agenda for Ahmed Tinubu 2023, a group campaigning for Tinubu’s candidacy, Prince Dayo Adeyeye, said Tinubu’s health should not be a concern because, according to him, the health and life of men are in the hands of God.

In an interview with one of our correspondents, Adeyeye, while responding to a question on the health of their candidate, said, “Let us not make his health a major concern. The health and the life of a man are in the hands of God Almighty. Even a person who seems healthy today might collapse and die tomorrow.

“So, issues beyond the realm of human beings should be left in the hands of God. Some people thought Buhari would not survive his health challenge about four years ago but look at him today. I won’t react to those who want to make the health of Asiwaju Tinubu a subject of politics.

“I was the National Publicity Secretary of the PDP when Buhari was sick but I never made issues out of his condition, despite being in the opposition party then because as a Christian, I know such a matter could only be determined by God Almighty.

“Those who travelled abroad to see him came back with a very good report. They said he is hale and hearty and that his health hasn’t deteriorated in any way.”

Meanwhile, the intra-party disagreements in the Lagos chapter of APC seem to be festering as one of the groups in the party, Lagos4Lagos Movement, has continued to express its resolve to change the status quo. The group maintained that a situation where one man would decide who governs the state should be stopped.

The disagreement worsened during the ward and local government congresses as the APC had parallel congresses.

A former Secretary to the Lagos State Government and apex chairperson of Lagos4Lagos, Princess Adenrele Adeniran-Ogunsanya, told Sunday PUNCH that it was unacceptable for one person to single-handedly decide who would occupy political positions in Lagos.

“Lagos4Lagos means the money of Lagos should stay in Lagos and the benefits should not appear only in one man’s pocket. Many are waiting for them to be called upon and say ‘you are going to be the next governor.’ This should not be so. We should have a governor we all choose and have confidence in.

“I think God allowed what has happened to us in order to teach us a lesson. This is the time we must use that lesson to make changes. I am not afraid of any human being. I respect older people and people generally, but definitely not afraid. I have no apology.

“As of the time he (Tinubu) was trying to change (Babatunde) Fashola, we were successful in stopping them. I don’t think anybody is high and mighty. I am afraid of God, definitely not any leader but I will have respect for that leader. Is he not a human being like me?”

He expressed optimism that Lagos would be stronger and better when no godfather is allowed to choose for Lagosians. “For goodness sake, from 1999 till now, you have had the opportunity of taking us for a ride, you must know that there is a limit; it is only for some time,” he added.

Also, the Lead Visioner for Lagos4Lagos, Jide Adediran, urged the people to use their power to choose their leaders.

He added, “We often shy away from our responsibilities as followers. We habitually fail to use our powers to choose as enshrined in our constitution. It has always been ‘My votes will not count’, ‘It is a waste of time’, ‘Don’t bother, they will rig it anyway’, ‘APC and PDP are the same, and I can’t vote for either.’

“These are some of the reasons why the highest votes in Lagos was 1.8 million, barely 28 per cent of the 6.5 million eligible voters. This was in 2011. It has been on a steady decline since then up to the 2019 election that saw the current Governor, Babajide Sanwo-Olu, getting elected by only 12 per cent of the eligible voters in Lagos. This was by far the poorest of all outings.”

Also speaking to Sunday PUNCH, a member of the movement, Sunday Ajayi, said godfatherism had caused a lot of problems in Nigeria’s democracy. “The era of godfatherism is gone. That is why we are saying the ward and state executives must work with us,” he added.

But the spokesperson for Lagos APC, Seyi Oladejo, challenged Lagos4Lagos members to test their polarity at the poll rather than giving excuses, adding that contrary to the claim by Lagos4Lagos, Tinubu had not been overbearing in his leadership style.

“There is nothing like Asiwaju being overbearing or that he lords it over others in Lagos APC or wherever. There is nothing wrong for them (Lagos4Lagos) to be ambitious; that is the beauty of democracy. But until they test their popularity at the poll, their only hope remains in the realm of conjecture. I can assure you that we have tested and experienced soldiers who have weathered many political challenges.”