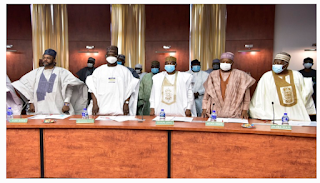 “The CNG has resolved to expose the faces of identified unpatriotic northern traitors who have been paid huge sums of money to market southern candidates. We categorically reject anything to do with any undemocratic process such as zoning,” it stated. “We urge all northerners to resist the antics and tactics of the self-appointed antagonists and hired cronies from the North who are today all over the place conscripted in the conspiracy to deceive northerners into abandoning what God has blessed us with; its human resources.”

Speaking at a press briefing in Abuja on Monday, the youths under the aegis of Coalition of Northern Group (CNG), one of the group’s leaders, Abdul-Azeez Suleiman, said northerners would not be forced to make choices detrimental to their region.

The northern coalition’s position came on the heels of a video on social media showing a member of the House of Representatives, Abubakar Lado Suleja (APC Niger), addressing Bola Tinubu as “Mr President.”

According to the northern group, rotating the presidency between the northern and southern regions is a myth and unconstitutional.