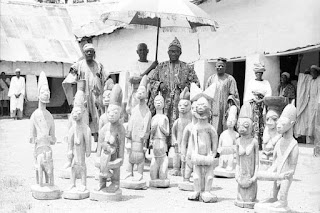 Oba Laoye was an expert who could use the talking drum, to communicate with people. He was a dancer, drummer, musicologist, teacher, poet, storyteller, communicator, pianist, Yoruba cultural icon and trained pharmacist. It is doubtful to talk of the talking drum in African culture, without mentioning the name of Timi Adetoyese Laoye, whose dual status as a king and a drummer, brought him instant fame and applause all over the world.

Oba John Adetoyese Laoye was born on the 21st of February 1899, the great-great grandson of Timi Bamigbaye Ajeniju, who was the second Timi to reign in present Ede.

Ede is one of the older towns in Yoruba land and traditionally said to have been founded by Timi Agbale around 1500. Agbale was a hunter and a war lord, sent by the Alaafin of Old Oyo empire to establish a settlement, to protect the Oyo caravan routes to Benin and the coast.

"A carving in a Sango shrine is not worshiped. Sango himself is practically never represented. The carvings are mostly identified as the gods' wives, priests, followers and initiates. In the case of the Ede shrine the original identity of the twenty-four figures has been lost and they are now vaguely described by the aged priestess as people killed by lightening. The purpose of the carvings is difficult to define.

They are more than mere decoration. They are intended to create an atmosphere, a feeling of heightened reality which is conductive to worship. The purpose of worshiping Sango is not to become a perfect human being but to live a fuller, intensified live."