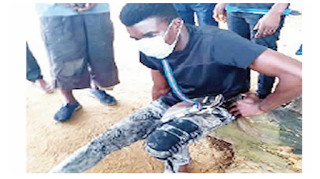 THERE was pandemonium on Thursday outside the gate of the Bedmate Furniture in Magboro, in the Obafemi Owode Local Government Area of Ogun State, as policemen allegedly fired tear gas and live bullets to disperse workers agitating for better pay and regularisation of their appointments.

PUNCH Metro had reported that the protesters on Wednesday expressed dissatisfaction with the firm’s alleged refusal to increase their salaries, which they described as meagre, and also regularise their appointments.

It was gathered that though the management of the company issued a circular around 6am on Wednesday to inform the workers of its decision to shut down the firm, the workers became agitated on Thursday when they saw trucks moving into the company to load goods (furniture).

One of the workers, who identified himself simply as Across, said, “This morning (Thursday), around 8am, we came here at the gate to continue our protest and demand salary increase. Yesterday (Wednesday) evening, we were told that the company was going to shut down and that there was no work for now.

“This is the place where we are working; we need to come out again to know what is happening. They said they had shut down, but trucks were entering to load some goods.

“We then insisted that the trucks would not enter and load since they (management) said they had shut down. But the policemen attached to the company came out and said we should allow the trucks and buses to enter.

“We maintained that the company should shut down as they claimed and that the vehicles should not enter to load. But the policemen said they were in the company to protect the Chinese people and that they were not concerned about our protest.

“Before you know what was happening, they shot tear gas. They also shot live bullets. One of our colleagues was injured in the leg. It is surprising that a Nigerian policeman will not protect us, but prefers to shoot us.