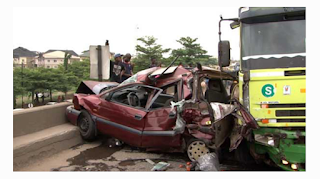 A woman has been killed after a motorcycle conveying her rammed into a truck on Lagos-Abeokuta Expressway on Friday, October 1.

The Ogun Traffic Compliance and Enforcement Corps (TRACE) confirmed that another male sustained grievous injury in the accident.

The Owode-Ijako Unit Commander of TRACE, Temitope Oseni explained that the accident occurred at about 1:50 p.m.

She added that the motorcyclist, who was on top speed, was trying to overtake a vehicle at a diversion stretched area when it collided with the truck going in the opposite direction.

Ms Oseni said that four persons, three males and a female, were involved in the accident.

She added that the victim who happened to be one of the passengers on the motorcycle died instantly.

“The corpse of the victim, which was taken away by the police, was later handed over to the family members, while the injured was taken to an undisclosed hospital for treatment,” she said.

The unit commander said that the truck and motorcycle had been towed to Ifo Police Station, to ease the free flow of traffic in the area.

She advised commercial motorcyclists to desist from excessive speeding and reckless driving that could lead to unnecessary loss of lives on the roads.