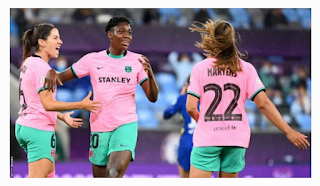 Title-holders FC Barcelona Women kicked off the 2021/2922 UEFA Women’s Champions League with a dominant 4-1 win over Arsenal Women on Tuesday.

In the Group C match, Nigerian Asisat Oshoala haunted her old club with a goal and an assist in their opening group fixture.

Arsenal lost for the first time since February as the formidable and prolific LaLiga champions made a fine start to the new 16-team group stage.

It was a match that pitted two of Europe’s most in-form teams against each other.

It was one-way traffic from the outset at the Johan Cruyff Stadium, with the quartet of Putellas, Caroline Graham Hansen, Oshoala and Caldentey causing all sorts of problems.

The hosts were creative going forward and launched wave after wave of attacks while dominating possession.

They immediately hunted in packs to recover the ball on the occasions it was lost.

Marta Torrejon was next to test Zinsberger, but the Gunners managed to hold out until just past the 30-minute mark.

This was when Zinsberger got down to push out Oshoala’s low shot at her near post, only for Caldentey to react quickest to collect the loose ball and slot in from close range.

Oshoala lashed into the side netting before the dominant FC Barcelona did manage to double their lead just before the interval.

This was after Oshoala drove down the right flank and into the penalty box before cutting back for UEFA Women’s Player of the Year Putellas to guide home.

Things only got worse for Arsenal immediately after half-time, with Oshoala easily racing away from Jennifer Beattie and picking up a fine through ball before coolly finishing for FC Barcelona’s third.

He replaced his front three as Tobin Heath, Nikita Parris and Caitlin Foord were all introduced at once.

Zinsberger saved from the dangerous Hansen with her legs, and the confident Caldentey narrowly missed picking out the top corner from a distance.

But Arsenal began to enjoy more success after the changes, with U.S legend Heath shooting wide and Parris seeing an effort cleared off the line by Mapi Leon.

This was after FC Barcelona substitute Martens had hit the side netting with a great chance just minutes after coming on.

Arsenal did reduce the deficit and provided a glimmer of hope of a late comeback when Heath’s excellent free-kick from the right bounced in off Norwegian midfielder Frida Maanum.

However, Martens would not be denied as she went close again before then finding the back of the net. She was sent clear in behind England defender Leah Williamson before lifting the ball over a committed Zinsberger.