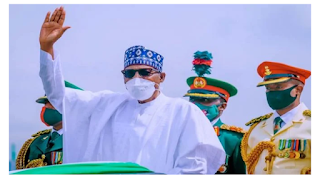 The Peoples Democratic Party, Yoruba socio-political group, Afenifere, the Pan Niger Delta Forum and others have mocked the President, Major General Muhammadu Buhari (retd.), over his Independence Day speech which they said failed to address critical issues affecting the country.

Speaking through a statement titled, “PDP To Buhari: Comparing Period Under Your Watch to Civil War Experience Vindicates Us,’’ issued by its National Publicity Secretary, Kola Ologbondiyan, the PDP said it had been vindicated by the President’s speech that the Buhari regime was the worst in the nation’s history.

The party noted that Buhari’s admission in his speech that Nigerians had faced difficulties similar to the situation of the civil war under his watch vindicated its position that “his government is incompetent, confused and the worst in the history of our country.”

The party said the fact that the President compared the challenges and sufferings of Nigerians under his regime to the agony of the civil war, underscored the horrible situation in the country today.

On its part, Afenifere expressed disappointment over the speech, describing it as ‘a familiar song of blame game and an echo of his military incursion.’

Buhari on Friday during Nigeria at 61 independence anniversary speech, among other issues, blamed middlemen for the high food prices in Nigeria, reiterated that Nigeria’s unity was not negotiable and claimed that his regime was winning the war against terrorists.

The Afenifere’s National Organising Secretary, Kole Omololu, in a statement to Saturday PUNCH on Friday said the President should show the middlemen and let the world identify and shame them and stop giving ‘lame excuses’ of an ‘indolent and insensitive administration.’

Omololu said, “This is a familiar sing-song of Mr Buhari. His blame game did not just start now; it’s actually an echo of his military incursion into governance. What has the government done to arrest the grievous attacks on farmers and wanton destruction of farmlands by cows herded by vicious killer herdsmen?’’

A Senior Advocate of Nigeria and constitutional lawyer, Mike Ozekhome, said Buhari might be right to say no president since 1999 had done what he did in the last six years.

He said that examining the indices of the Buhari regime, it was clear that no president had dealt more blows to democracy, rule of law, good governance and transparency in government as he had done.

Speaking with one of our correspondents during a telephone interview, Ozekhome said, “No president has facilitated the building of refineries and rails lines to his consanguineously-related neighbouring states as he has done, while the refineries and rail lines in his own country are dead, and price of petrol increased beyond the reach of the people. No president enthroned more insecurity, poverty and corruption as he has done.’’

The group’s position was contained in a statement by its National Publicity Secretary, Ken Robinson.

The statement in part., “This year’s Independence Day speech by (the) President, (Major General) Muhammadu Buhari (retd) can easily be deemed the worst independence day speech in Nigeria’s history.

“The speech was indifferent to the mood of the country; the growing disaffections, dissensions and disillusions, arising from the actions and inactions of the government. Rather, it’s full of hallucinations and wishful thinking, perhaps, based on what might be pleasing to the President, and not the citizens.

“There is something wrong with the president’s speechwriters and handlers. They offend citizens’ sensibilities in their ridiculous, tenuous justification of the colossal failure of the administration. They are either making excuses or playing the blame game; it’s always someone else’s fault.’’

Also, the apex Igbo socio-cultural organisation, Ohanaeze Ndigbo, on Friday said though Buhari didn’t define what he meant by his claim that no government since 1999 had done what he did in six years, the protests in the country reflected the feelings of Nigerians about his performance.

“Each government has its own unique approach to issues. So, if he says what he has done is different from what others did, that is true. But to define it is a different ball game. Today, it was discovered that there were protests in Lagos, Ondo and Abuja but the South-East is locked down. So these (protests) show how they (Nigerians) feel about the government. There was not a time the populace reacted as they are reacting now.

“The South-East is saying, ‘You are not fair to us. It’s better we go.’ That is what the agitators are saying. Using the carrot approach so that things will calm down is far better than closing his mind completely on the people of the South-East,” the group said through its spokesperson, Chief Alex Ogbonnia.

Besides, the Middle Belt Forum said Nigeria was more divided now than when Buhari assumed office.

The organisation’s President, Dr Bitrus Pogu, said, “I don’t know who wrote that speech for Mr President but I don’t think he assessed the speech well. He came in when one dollar sold for below N200 and today a dollar sells for nearly N600. There is nothing he met that has not doubled or tripled in price. The insecurity situation has worsened; it was localised in the North-East and today, it is all over the country. People can’t go to the farms and one is always afraid of being kidnapped for ransom. Nigeria is more divided today than it has ever been, even in the far North where the Fulani and Hausa were one. Nigeria is so divided under his regime.”

Commenting on the speech, the Ilana Omo Oodua led by Prof. Banji Akintoye, said it had emboldened secessionists to continue their struggle.

Akintoye in a statement on Friday said, “The entire speech of Buhari symbolises hopelessness and chaos. It was a declaration of war against the peace-loving people of Yorubaland. Our message to him is that we shall not be intimidated. We shall remain loyal and committed to our struggle for an Independent Yoruba Nation. We shall be undaunted.’’

He said the president should leave Igboho who was pursuing a noble cause alone and rather name the sponsors of herdsmen, Boko Haram and those killing, maiming and kidnapping Nigerians.

“It is total nonsense that Buhari is bothered about a Sunday Igboho who is engaged in a lawful agitation, endorsed and confirmed now by a court of competent jurisdiction, United Nations and African Union Declarations on Peoples and Human Rights while he (Buhari) looked away on the murderous activities of the Fulani herdsmen, terrorists and Miyyetii Allah in the South and Middle-Belt territories.

“Mr President said an unknown sitting member of the Nigerian National Assembly is involved in the funding of Sunday Igboho. That’s absolute mendacity. The Yoruba people from villages to villages to the Diaspora are contributing their hard-earned resources to oil and sustain the agitation.’’

Besides, Afenifere leader, Chief Ayo Adebanjo, lampooned the President for saying during his speech that Nigeria’s unity was not negotiable.

Adebanjo said that Buhari, who is 78-years-old, ought to have known that Nigeria’s independence and terms of unity were negotiated in the 1950s, but the President was a “small boy at the time, hence his ignorance.”

The 93-year-old Afenifere leader spoke during a live chat with The PUNCH on Friday while responding to the President’s Independence Day speech.

Adebanjo said that in 1953 when the North opposed the call for independence and rather advocated ‘Araba’ (secession), Chief Obafemi Awolowo and Dr. Nnamdi Azikiwe convinced the northern leadership headed by Ahmadu Bello, to negotiate the terms of their unity and ultimately their independence from British rule.

Adebanjo said, “He (Buhari) is talking nonsense. These are the kinds of things that cause trouble. How can the President of a multinational, multilingual and multi-ethnic society say the unity of Nigeria is non-negotiable? We negotiated the unity of Nigeria in 1954 before independence. The 1960 Constitution was a product of negotiation that arose from the London constitutional conference. Of course, I can’t blame him (Buhari). He was still in primary school at the time, so, he couldn’t understand. He should go back to the records.’’

In its reaction, the Chairman of the Buhari Media Organisation, Niyi Akinsuji, said the PDP should be ashamed of itself for trying to make cheap political gains from the nation’s challenges.

He said, “Unlike the PDP, our President is not playing the ostrich, he admitted that we have challenges like every other nation of the world. He also outlined efforts being made to surmount the challenges, he also listed areas which as a nation we should be celebrating. Those achievements were recorded in spite of these challenges, what is wrong with that?”

Meanwhile, the Ijaw youths under the umbrella of the Ijaw Youth Council, on Friday, urged the President to take a bold step and write his name in gold by acceding to the clamour for Nigeria’s restructuring.

In a statement in Yenagoa to felicitate with Nigerians on the occasion of the country’s 61st independence anniversary and Bayelsa’s 25th anniversary, a spokesman for the IYC, Ebilade Ekerefe, urged Buhari to “rewrite history and revert the country to true federalism.