Police arrest 12 for kidnapping, gunrunning, other crimes in Niger - The Naija Weekly

Police arrest 12 for kidnapping, gunrunning, other crimes in Niger 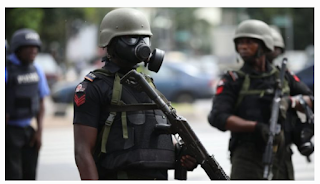 The Police Command in Niger says it has arrested 12 persons for kidnapping, gunrunning, robbery, and persons supplying fuel to bandits in parts of the state.

Commissioner of police in the state, Monday Kuryas, announced the arrest during a public presentation of the suspects to the press on Saturday in Minna.

According to the police, the two men said the arms were being taken from Sokoto to someone known as Yellow in Mokwa, Niger state.

He was said to have confessed that the guns were given to him by a local fabricator named Bilya to deliver to a Bulus at the rate of N1,000-commission on each of the guns.

On October 29, the police arrested three suspects in connection with a robbery case.

Mohammed Muazu and Salihu Isah were on October 2 arrested at Tudun-Fulani on suspicion for being suspected motorcycle snatchers.

Then on October 3, the police arrested a fuel black market dealer, Umar Mohammad, and a fuel attendant, Adamu Atiku, for buying fuel inside a jerrycan in Minna.

The police said all suspects would be arraigned as soon as investigations were concluded.