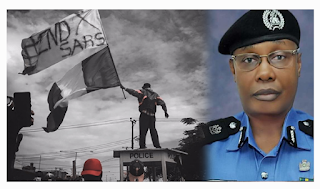 The Lagos police command has insisted on crushing the first-year #EndSARS anniversary demonstration from holding in the public, claiming faceless anti-#EndSARS elements have planned to unleash mayhem.

This is contained in a statement signed by its spokesperson, Adekunle Ajisebutu.

“The police will only allow an indoor and virtual event in commemoration of the #EndSARS anniversary and will provide adequate security at the venue(s) if known. This is in recognition of the rights of every Nigerian to express his or her interest,” said the statement issued on Wednesday night.

The police claimed they would have granted permission for the demonstration to hold, but “intelligence at our disposal has revealed plans by some faceless groups or individuals” to stage an anti-#EndSARS anniversary protest in the state the same day.

“In view of the conflicting interest between the pro and anti-#EndSARS anniversary groups and threat to cause mayhem,” the police explained, “the command once again warns both groups against any form of street protest between now and October 20, 2021, and beyond.”

The command said although the citizens have the right to peaceful protests for public safety, the protest should be shelved, adding that its “critical security assessment and intelligence report” revealed that it would be inappropriate to allow the protests to hold.

Human rights activist Femi Falana and civil society groups condemned the attempt by the police to clamp down on protesters.

Last week, the police in Lagos threatened to use “all legitimate means” to quell the planned #EndSARS anniversary protest in the state.

“To forestall breakdown of law and order, the police will use all legitimate means within their constitutional powers to suppress the planned protest,” the police had warned.

In 2020, the #EndSARS protests were held nationwide between October 8 and 20, calling for an end to police extortion, brutality, and extrajudicial killings, especially by the disbanded Special Anti-Robbery Squad (SARS).

The protest, which started peacefully, led to the disbandment of SARS by the federal government, but hoodlums took advantage of the demonstration to unleash violence, and also loot and destroy private and public facilities.

The protest was brought to a halt on October 20 when soldiers stormed the Lekki tollgate to disperse protesters fired shots that left several people killed and injured.