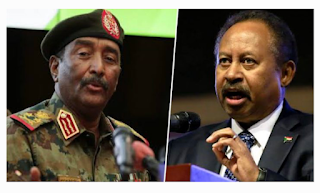 Security forces killed three people during a nationwide protests in Sudan on Saturday demanding the restoration of a civilian-led government in the country.

In the capital Khartoum, security forces used tear gas and gunfire to try to disperse the protesters, who had been setting up a stage and discussing the possibility of a sit-in, said a Reuters witness.

The Central Committee of Sudanese Doctors said, aside from the dead, 38 people were injured during the chaos, including some by gunfire.

An eyewitness said they heard gunshots and saw people being carried away bleeding from the direction of the parliament building.

Sudanese police denied shooting protesters during the demonstrations, saying on state TV that instead one policeman sustained gunshot wounds.

A representative of the military was not immediately available to comment.

The protests marked the biggest challenge to General Abdel Fattah al-Burhan since he ousted Prime Minister Abdalla Hamdok on Monday.

Protesters carried Sudanese flags and chanted “Military rule can’t be praised” and “This country is ours, and our government is civilian” as they marched in neighbourhoods across Khartoum.

People also took to the streets in cities in central, eastern, northern and western Sudan.

In central Khartoum there was a heavy military deployment of armed troops that included the army and the paramilitary Rapid Support Forces.

The United States and the World Bank have frozen assistance to Sudan, where an economic crisis has seen shortages of food and medicine and where nearly a third of the population are in need of urgent humanitarian support.

While Western states have denounced the coup, Sudan’s regional allies Saudi Arabia, the United Arab Emirates and Egypt have emphasised the need for stability and security.