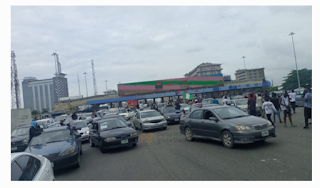 Dozens of vehicles drove through the Lekki toll gate on Wednesday morning as Nigerian youths marked the first anniversary of the #EndSARS protest.

The protest was staged in honour of those who lost their lives during last year’s protest.

Protesters at Lekki toll gate beeped their cars horn as a signal for their support for the ongoing #EndSARS memorial.

They waved Nigeria’s flag while shouting #EndSARS in their vehicles.

The Lagos police command has deployed its personnel at strategic points at the Lekki toll gate, with officers seen wielding guns, firing teargas and mishandling protesters.

So far, the police have arrested three persons including a journalist, and a newborn is said to be in critical condition from teargas fired into a commercial bus by the police.

In 2020, #EndSARS protests were held nationwide between October 8 to 20, calling for an end to police extortion, brutality, extrajudicial killings and abuse of power, and the disbandment of the criminal Special Anti-Robbery Squad (SARS).

The protest, however, turned violent as hoodlums took advantage of the situation, burnt police stations, public facilities and carried out attacks on officers and citizens.

The protest climaxed on October 20 when soldiers opened gunfire on peaceful protesters.