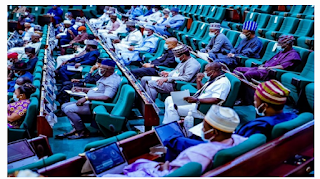 The House of Representatives has warned that any ministries, departments and agencies (MDAs) that fail to implement the 2021 budget will be turned back from the defence of their 2022 budgets and may not get their appropriations.

The spokesman of the house, Benjamin Kalu (APC-Abia), disclosed this at a news conference on Thursday in Abuja after the 2022 budget passed second reading on the floor of the house.

Mr Kalu said the house frowned at MDAs that took monies from the government and failed to implement what it was meant for.

“It is one thing to move the budget early enough, it is one thing to return the budget from January to December circle, but it’s another thing to sabotage the government by saying you have not received 100 per cent funding and so there will be no implementation,” said Mr Kalu. “There is no place where the Appropriation Act says you must receive 100 per cent funding before you start implementation.”

He added, “We frown at agencies of government that say we have only received 75 per cent, we only received 60 per cent, and we are waiting for more to come before we begin. Why don’t you start with the 60 per cent and when others come, you mobilise? To wait until the dying minute and then give contractors 100 per cent for them to perform before coming for budget defence is a wrong strategy.”

He warned that “any MDAs that took government monies, kept it in the bank and refused to use it and are coming to tell us that it was not complete, they will be sent back.”

The legislator further threatened that “some of them may not get an appropriation for the new budget, because until you have justified what you took before. What is the essence of asking for more?”

The lawmaker added that the house would also be on the look for MDAs that ignored house resolutions in their budget preparation.

“If you ignored the resolution of the parliament and drafted your own budget without making reference to what the representatives of the Nigerian people have asked you to please consider, you have acted on your own. It is an exercise in futility,” the legislator cautioned. “Because we are going to pick it up and match it against the Legislative Compliance Committee’s report and find out if the MDAs are complying with legislative resolutions, it is no longer an all comers’ affairs.”

He assured Nigerians that the budget would not “leave the way it came to the National Assembly.

“It is either we take it up or bring it down,” said Mr Kalu. “It will not be garbage in garbage out, a lot of work is going to be done.”

He also announced that the house had adjourned to November 9 “to allow us to consider the budget at the committee level.”