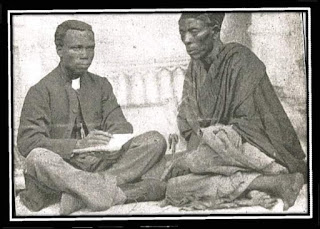 Rev Lijadu was an Egba man from Abeokuta. He resumed as Catechist in Ondo on October 18, 1890. He was ordained Anglican Priest during his time in Ondo.

The decision of Lijadu to study Ifa, Yoruba Traditional Religion during his time as Anglican Pastor was to expose the evil. He believed the easiest way through which Christianity could be spread among Africans was to first study their religion with the intention of exposing the evil.

Lijadu got trapped in the middle of his findings as he discovered that African Religion particularly Ifa is about love, selflessness, unity, self sacrifice, traditional healings etc. He fell in love with Ifa and eventually wrote 2 of the earliest books on Ifa "Ifa" and "Orunmila". The books which were written to propagate and develop African Religion were published in 1901 and 1908 respectively.

When Rev Lijadu in 1901 eventually established his own Church, The Evangelist Band Mission (EBM) - Ijo Ajihinrerelofe, he inculcated some Yoruba customs and traditions which he discovered during his time as Ifa Scholar into the doctrine of his Church. The doctrine of the Church was based on those aspect of African  culture and way of life that encourage love, unity, selflessness etc rather than relying on foreign principles and philosophy. With this, the Church became so popular among the Ondos, Ikales, Ilajes, Ijos etc.

Rev Lijadu finally parted way with the Anglican Church when he lost his EPISCOPATE MISSION in 1920. As part of his succession plan, he sent his only son, Folarin Lijadu to CMS Training Institute in Oyo. At the end of his program, the boy was not ordained due to doctrinal differences between the Anglican Church and Lijadu Church. Rev Lijadu who was not happy with the situation personally ordained his son and this led to the withdrawal of his African Priest Licence.