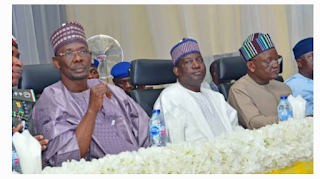 The majority of the states in the North-Central have proposed a 39:35:26 per cent revenue sharing formula for the three tiers of government in the country.

In his remarks, Governor Yahaya Bello of Kogi advocated a sharing formula of 39, 35, and 26 per cent between the federal, state, and local governments, respectively, to effect the country’s desired development.

Mr Bello, represented by his Deputy Governor Edward Onoja, stated that the main objectives of revenue allocation were to promote national unity and accelerate the economic growth of all tiers of government.

He lamented the current formula in use had failed to achieve the desired aspirations of the citizens for development.

“We can no longer deny that a comprehensive review of RAF currently in use in Nigeria had become overdue. Currently, the Federal Government takes 52.68 per cent, the 36 states, and the FCT split 26.72 per cent and the local government councils make do with 20.60 per cent,” he explained. “The nine oil-producing states receive an additional 13 per cent as derivation revenue which is distributed among them depending on the actual contribution of each to crude oil receipts.”

According to the Kogi governor, existential realities between the three tiers of government “necessitate a more equitable sharing plan for all revenues accruing into the federation account.”

He, therefore, urged the review committee to take a critical look at the revenue allocation formula currently in use to do the needful in the interest of Nigerians.

The representative of Plateau proposed a 40, 35, and 25 per cent formula, while Nasarawa state advocated 44, 35, and 21 for the three tiers of government, respectively.

Also speaking, the Commissioner for Land, Survey and Solid Minerals, Bernard Unenge, who made the presentation on behalf of the Benue state government, advocated 30, 45, and 25 per cent for federal, state, and local governments, respectively.

On her part, the Kwara’s Commissioner for Finance, Florence Oyeyemi, in a virtual presentation, advocated a 33, 30, and 27 per cent sharing formula, respectively.

Joel Akowe, on behalf of the Academia, proposed 30, 35, and 20 per cent respectively, while proposing a 15 per cent allocation to a special fund.

The representative of the Network of Kogi State Non-Governmental Organisations (KONGONET), Muraina Idris, proposed 40, 27 and 33 per cent respectively, as he argued that this formula would enable the federating units and constituents to receive more attention in terms of development.

He added that the state governments had not really shown the need for increased resources over the years as the civil society community felt that a huge gap had existed between resource allocation and development across the majority of the federating units.

For the Vice President of the National Council of Women Societies (NCWS), Kogi branch, representing women, the three tiers of government should receive allocations in the ratio of 30, 34, and 23 respectively, but that the 13 per cent derivation for oil-producing states be retained.