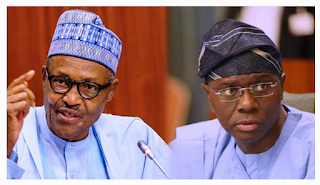 Governor Babajide Sanwo-Olu has advocated an upward review to 42 per cent of the revenue accruing to states from the Federation Account.

Mr Sanwo-Olu noted that an upward review to 42 per cent would enable the states to cater for their rising responsibilities.

The governor made the call at a two-day South-West Zonal public hearing to review the Revenue Mobilisation Allocation and Fiscal Commission (RMAFC)’s sharing formula.

Under the current revenue sharing formula, the federal government takes 52.68 per cent, the states 26.72 per cent and the local governments 20.60 per cent, with 13 per cent derivation revenue going to the oil-producing states.

The governor further stated that the present revenue sharing formula among the tiers of government which became operational about 29 years ago, was long overdue for amendment.

“It is the state’s position that state government should be granted the highest share of 42 per cent, while the share of the Local government be increased to 23 per cent since both tiers of government are closer to the people,” added the governor.

Mr Sanwo-Olu also pointed out a need for effective fiscal laws that would ensure a framework for beneficial and dynamic intergovernmental fiscal relations to help in nurturing strong, transparent, efficient, and independent fiscal institutions.

“In addition to the existing items on the concurrent legislative list, the federal and state governments should collectively share the following responsibilities: regulation of labour, mines, and mineral, social security and statistical system (census, birth, and death, etc.),” he said. “Guidelines and basis for minimum education, business registration, price control, national parks, fishing, and fisheries.”

The Lagos governor also suggested that the derivation and ecological funds should be de-centralised.

“In other words, the one per cent allocated to the federal government in respect of the Derivation and Ecological Fund should be deducted from the federal government’s share of Derivation and Ecological Fund will now stand at 1.72 per cent,” said Mr Sanwo-Olu. “The proportion allocated to Stabilisation Fund should be increased from 0.5 to 1 per cent. This amount should be deducted from the percentage hitherto allocated to special fund on the development of natural resources.”

He urged the federal government to take 34 per cent from the Federation Account and focus exclusively on defence, external affairs, international trade, currency and banking, exchange control and federal trunk roads.