Robbers plucked out my eyes because I had no money to give them, says 49-year-old PhD holder - The Naija Weekly

Home News Robbers plucked out my eyes because I had no money to give them, says 49-year-old PhD holder

Robbers plucked out my eyes because I had no money to give them, says 49-year-old PhD holder 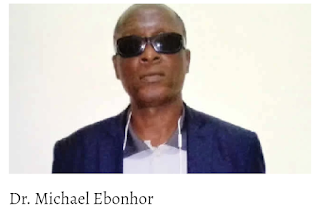 Dr. Michael Ebonhor was not born blind but lost his two eyes at the age of 23, when armed robbers attacked him and plucked out his eyes. The Guidance Counsellor shares with ANGELA ONWUZOO his traumatic experience and how he refused to allow disability to rob him of his dream of becoming a PhD holder.

July 20, 1995 remains a day Dr. Michael Ebonhor will not forget in a hurry. It was a sad and horrific day for him. It was a day that armed robbers plunged him into a world of darkness by plucking out his two eyes, simply because he had no money to give them when they came to rob his neighbourhood.

The robbers, numbering about six, had struck that fateful day and raided his room when he was a 200-level Geography and Social Studies student at the Tai Solarin College of Education (now Tai Solarin University of Education), Ijebu Ode, Ogun State.

While Ebonhor’s roommate was lucky to have escaped the furry of the robbers who had come with dangerous weapons, including guns and machetes by running away, the Delta State indigene was not that lucky, as the robbers descended on him for not having money to give to them.

The horrific experience was made more traumatic because he was the one struggling to pay his school fees and fend for himself while schooling. He was working part-time as a bus conductor as a student.

Ebonhor, however, even after the unfortunate encounter with the robbers, vowed not to let his loss of sight truncate his dream of becoming a PhD holder.

Although Ebonhor’s blindness was shocking and sudden and was greeted with sadness by his family, the father of two said he has overcome the regret of losing his sight in such a manner, noting that he has no bitterness for the robbers that blinded him. He said will even forgive his assailants if they are eventually arrested by the police.

I was the only one injured because I had no money

Sharing his traumatic experience with PUNCH HealthWise, Ebonhor who is now a Guidance Counselling Officer with the Federal Ministry of Education, Ogun State, said, “I was not born blind. It happened on July 20, 1995. Then, I was 23 and a 200 level student of Tai Solarin College of Education, Ijebu Ode, Ogun State. I was studying Geography and Social Studies at the college and was living off-campus.

“So, that fateful night, a group of armed robbers came to our neighbourhood and raided about six buildings. My building was the fifth that they raided.

When they entered my room, they demanded money. I had a roommate and he was the first person to be dragged out by the robbers. But he was able to escape. When they pursued him up to a distance and could not get him, they came back for me and I didn’t have money to give them.

They used the guns to hit me on the head and used a machete to torture me and in the end, they plucked out my two eyes.

Sadly, I was the only one that was injured during that robbery attack. Those of them that had money and gave it to them were not injured. They were not hurt.”

I was unconscious for hours after my eyes were plucked out

Ebonhor told our correspondent that he nearly lost his life during the attack as he became unconscious for several hours before help came his way.

More traumatic was when he woke up and saw darkness everywhere, wondering how he would sojourn in life without sight in his prime.

“In the morning, my neighbours took me to a nearby hospital where I was given first aid and later I was transferred to the Olabisi Onabanjo University Teaching Hospital (OOUTH), Sagamu, Ogun State.

“I was hospitalised for six months. When the attack happened, I became unconscious. But after some hours, I woke up. So, when I woke up, I saw total darkness and when I realised that my two eyes were gone, I was so devastated.

“Initially, the doctors would come and tell me not to worry, assuring me that all would be well.

“When I asked the chief consultant about my fate, she kept telling me all would be fine. But to what extent, she could not answer.

“Now, there was a day I was taken to the bathroom by a nurse and I hit my shoulder on the wall. That made me shed tears. I just wondered how somebody that was agile and independent would suddenly be led by people here and there. I just imagined how I would be relying on people for my movement.

“So, I asked the doctor after that experience if my eyes would function again and he wondered what brought about the question. I told him that someone wanted to donate an eye for me.

“It was then that the doctor told me that he had to be frank with me, that my eyes were gone and there was no remedy.

“He told me that even if someone donated an eye for me to see again, the nerves connecting my eyes and the brain had been damaged.

“So, nobody can donate an eye for me that will work”, Ebonhor narrated.

He went on, “At that moment, my emotions dropped. For the next two days, I stopped taking my drugs in the hospital. I was not eating regularly.