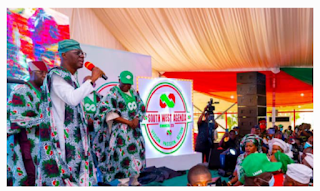 Governor Babajide Sanwo-Olu has launched a political group for the campaign of Bola Tinubu 2023 presidential ambition in Lagos.

The group named ‘SWAGA23’ was inaugurated on Thursday in Ikeja to kick off campaign activities for Mr Tinubu, a former Lagos governor and Mr Sanwo-Olu’s political benefactor.

The governor said he and the campaign team will drive the SWAGA agenda to ensure the victory of the former Lagos Governor.

“The SWAGA we are launching in Lagos today is a demonstration of Tinubu’s enduring political principles and strong vision. Those behind the movement took the three values and pushed them with passion. What we are witnessing today is the action from the vision and passion; this is what SWAGA represents. By the grace of God, we will drive this agenda to a logical end and we will all witness the inauguration of our political icon come 2023,” Mr Sanwo-Olu said at the flag off.

Mr Sanwo-Olu explained that his support for Mr Tinubu was hinged on his trust for the former governor’s political philosophy that prioritises development of human capital and economy.

The carnival-like event was graced by members of the state executive council, House of Assembly, and chairmen of local government areas, with Fuji star Wasiu Ayinde, KWAM 1, wrapping up the event with campaign songs for Mr Tinubu’s 2023 presidential ambition.

The flag off comes months after Governor Kayode Fayemi Fayemi trashed the campaign group for Mr Tinubu saying that the group was not in consonance with the party’s structure.

Also, Kogi  Governor Yahaya Bello in May asked youths to look for a younger Nigerian president since older people like President Muhammadu Buhari and Bola Tinubu, the National Leader of the ruling All Progressives Congress, have failed the country.

“The older generations have failed us,” said Mr Bello, “and, it is time for them to give room for the younger generation to take over the helm of leadership to make it right.”