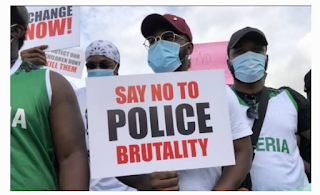 In a social media post on Friday, Falz disclosed the police were already at the Lekki toll gate to restrict Nigerian youths from exercising their fundamental human rights.

He alleged that the Lagos state governor was using the concert as a vice to sway youths from participating in the EndSARS memorial event.

“As I type this, there is already a HEAVY police presence at the Lekki toll gate. Best thing they could come up with is organising “concerts” to try and distract us from remembering the real heroes in all of this. The people they murdered,” the music star in an Instagram post said.

Lamenting that justice was yet to be served to individuals that suffered brutality in the hands of the police before, during and after the #EndSARS protest, Falz Insisted that the youths will not be silenced.

His comments come a few hours after Instagram skit maker Mr Macaroni took a swipe at celebrities for accepting Mr Sanwo-Olu’s invitation to perform at a concert meant to hold days before the Lekki shooting anniversary.

Mr Macaroni who rebuked celebrities for refusing to speak up against the government’s move to quell planned #EndSARS memorial events charged them to rethink their association with the government.

Falz’s social media post followed Landmark Event Centre’s refusal to allow its premises to be used for the “SoroSoke” summit, an event put together to mark the one year anniversary of the Lekki tollgate shootings.

Falz was listed amongst the prominent persons scheduled to speak at the summit.