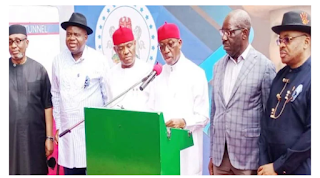 Five of the governors of South-South region have resolved to join the Rivers and Lagos states against the Federal Inland Revenue Service in the Value Added Tax suit pending before the Supreme Court.

The governors said this at a meeting of the South-South Governors Forum at the Government House, Port Harcourt, Rivers State, on Monday.

The Governor of Cross River State, Prof. Ben Ayade, was absent at the meeting and did not sent a representative to the meeting.

The Chairman of the South-South Governors Forum and Delta State Governor, Okowa, who a read a five-point communiqué, said the forum supported states collection of the VAT.

The forum also approved a regional security architecture to be launched soon, noting that the BRACED (an acronym for Bayelsa, Rivers, Akwa Ibom, Cross River, Edo and Delta states) have set up their security units.

Okowa said, “One:  Bearing in mind that most of the BRACED States have established their state security organs, we approve the regional security architecture which will be launched very soon.

“Two: Unequivocally support the decision for stated to collect the Value Added Tax and resolve to join the suit before the Supreme Court.

“The council urged the President and the National Assembly to take necessary measures to review some unfair aspects of the recently signed Petroleum Industry Act to ensure fairness and equity.

“It urged that the amendment should include a clear definition of host communities and that the Trustees should be appointed by state governments.

“The council call upon the President and the Federal Government to uphold the law establishing the Niger Delta Development Commission by appropriately constituting its board.”

Okowa added that the governors expressed the hope that the Federal Government would make the forensic audit report public.

He regretted that the President failed to consider the region’s request made  during the dialogue with a special delegation led by the Chief of Staff to the President, Prof. Ibrahim Gambari, including “the relocation of NNPC subsidiaries and IOC’s headquarters to the Niger Delta and the completion of a number of projects in the region, notably roads.”