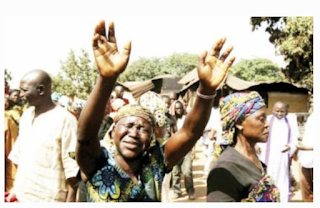 No fewer than 300 leaders of youth, women groups, traditional rulers and clerics met on Thursday in Kachia to dialogue on peace-building in Southern Kaduna.

The interfaith peace dialogue was organised by the Community of Sant’Egidio in partnership with the Catholic Archdiocese of Kaduna and that of Kafanchan.

The 300 stakeholders and leaders were drawn from Kajuru, Kachia and Jema’a local government areas.

The Community of Sant’Egidio national coordinator Henry Ezike stressed that violence would not solve Southern Kaduna’s problems and called for the end of wanton killings and destruction.

“This is why we want to say once more, ‘no more violence, no more killings’,” said Mr Ezike.

He described it as tragic that most people in the area regarded violence as a means for resolving disputes.

“Tragically, for many of our people in Kaduna state, they believe that violence and killing is one possible means of resolving disputes,” the peace initiative coordinator added. “But today, we want to say that violence is the mother of poverty and has never solved any problem. Rather it worsens the problems and creates wounds.”

Mr Ezike appealed to government officials, religious and traditional leaders, the youth and security personnel to reject the language of division and work together to create a new architecture of peace.

“All of us need to forgive and be forgiven. The injustices of the world and of history are not healed by hatred and revenge, but by dialogue and forgiveness,” he stressed.

Also, the Archbishop of Kaduna, Mathew Ndagoso, said peace must start from the grassroots.

Mr Ndagoso, represented by Daniel Kyom, stated that in his 18 years as bishop from Maiduguri to Kaduna, he had realised that the grassroots remained the foundation for peace.

“Anywhere I go, I meet with traditional, religious and political leaders at the grassroots because I do believe that if you are looking for true peace, this is where it is, at the grassroots,” Mr Ndagoso explained.