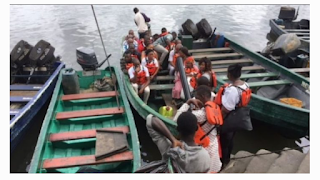 Bayelsa government on Tuesday in Yenagoa directed local government councils to speedily evolve legislation prohibiting the movement of speedboats after 7:00 p.m. without a permit.

“The commissioner will do letters to all the councils to work assiduously to pass the anti-night boat movement bye-law, to proscribe speedboat movements beyond 7:00 p.m. Any speedboat without security permit moving after 7:00 p.m. is an enemy boat,’’ said Deputy Governor Lawrence Ewhrudjakpo.

He stated this at separate meetings with traditional rulers from Southern Ijaw and Nembe LGAs.

“The issue of security is a major one for us, and if we take it for granted, it is going to weigh down on all of us. We are directing local governments to, between now and the end of October, set up vigilance groups. All communities must have their vigilance groups set up,” added the deputy governor. “The issue of the vigilance groups will not only lie on Divisional Police Officers (DPOs).”

According to him, the screening of members of the vigilance groups will be done by the DPOs, who, in turn, will be supervised by the commissioner of police.

“The commissioner for local governments is hereby directed to write officially to local government chairmen to form their vigilance groups between now and the end of October,” Mr Ewhrudjakpo further stated.

He noted that the measure would go a long way to complement the efforts of security agencies to curb crime on water routes in the state.

He noted that the state government was determined to give traditional rulers a sense of belonging and restore their role as custodians of culture and peace through the executive Community Administration Bill to be sent to the House of Assembly.