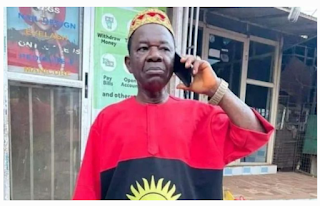 Mr Agu said he was distributing bread to the poor in Onitsha when he was arrested by soldiers and brutalised for wearing a dress that symbolises the rising sun, which is also the emblem of the defunct Biafra nation.

Mr Agu was taken into custody by the SSS shortly after his release by the army, his friends said, amidst claims that the repressive secret police may also torture and hold him in custody indefinitely. A spokesman for the SSS did not return a request seeking comments from Peoples Gazette on Saturday morning.

“Chiwetalu Agu is still not free. He is with DSS now,” writer Chiagozie Nwonwu said on Facebook. “Colleagues say they are looking for a top lawyer to bail him,” Nwonwu wrote on his known Facebook page on Friday.” Reports have circulated on social media that Mr Agu was being tortured to admit ties to proscribed Indigenous People of Biafra (IPOB). The SSS has a history of repression, intimidation and targeted assassination of government critics.

The arrest of Mr Agu, 65, came as President Muhammadu Buhari commenced deployment of security forces across the Igbo-dominated South-East region to quell separatist agitations. The call for succession has grown across the region since 2015 when the regime arrested Nnamdi Kanu.

Mr Kanu was freed on bail by a federal judge in Abuja in 2017, but he was abducted in June 2021 by regime security officials in Kenya and removed from that country to Nigeria. He has remained in custody ever since.

Mr Agu has said his decision to wear a dress with Biafran emblem was not to fan embers of secession, although he has previously criticised Mr Buhari as sectional and decried apparent marginalisation of Igbo ethnic group by the regime.