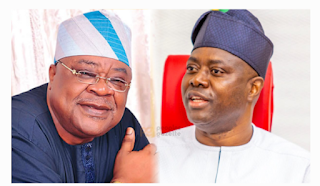 The Elders Advisory Council of the APC in Oyo has formed a Zoning Planning and Strategic Committee for its October 16 state congress.

The committee will meet on Thursday (today).

A reliable told disclosed that the committee was constituted to ensure a rancour-free and all-inclusive congress.

The council is led by former Governnor Adebayo Alao-Akala.

The source said the committee would also ensure that all interests were carried along and accommodated at the forthcoming state congress.

“Oyo State APC had peaceful, rancour-free, all-inclusive and successful ward and local congresses. The Elders Advisory Council constituted the Zoning Planning and Strategic Committee to ensure that all interests are carried along and accommodated at the forthcoming state congress,” the source explained. “We are going to the October 16 state congress as a united house.”

According to him, Musiliu Akinremi (APC-Ibadan North) and a member of the APC Caretaker/Extraordinary Convention Planning Committee (CECPC), has been appointed to chair the committee.

Idris Adeoye, a member of the council, was appointed as secretary of the committee, which has seven other members.

The committee would hold its inaugural meeting on Thursday in Ibadan.