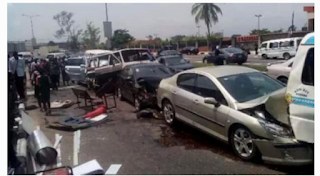 One person was killed while two others were seriously injured when a Toyota Highlander lost control and crashed into a shop at Orisumibare Market in Osogbo on Tuesday.

According to a witness, the driver of the vehicle, with registration number ENG 231 AA, was on the phone when he lost control and crashed into the shop.

The incident, which happened around 5:30 p.m., created traffic gridlock, but the timely arrival of the police restored normalcy in the area.

It took frantic efforts of traffic policemen to control a mob ready to set the vehicle ablaze. The police, however, succeeded in removing the vehicle from the shop.

The injured were taken to the UniOsun Teaching Hospital for treatment and the remains of the dead to a morgue.

The spokeswoman for the police command in Osun, Yemisi Opalola, confirmed the accident.

She said the driver had been taken into custody.