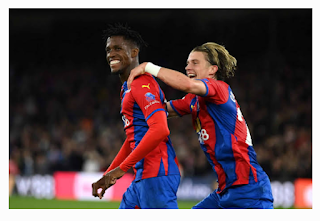 Manchester City suffered a 2-0 defeat in the hands of Crystal Palace at the Etihad Stadium on Saturday.

Wilfried Zaha scored early while Conor Gallagher grabbed a late second as City finished the game with 10 men after Aymeric Laporte was sent off in the first half.

Pep Guardiola’s side slipped to only their second Premier League defeat of the season on his 200th game in charge at the club.

City remain third in the league table while Palace move up to 13th position.

The visitors took a shock lead when Gallagher dispossessed Laporte to play in Zaha to score his 50th Premier League goal for Palace.

Following the opener, Palace defended well and City failed to create many clear-cut chances throughout the first half.

Just before the break, the hosts were reduced to 10 men after Laporte brought down Zaha and was shown a straight red card for denying a clear goal-scoring opportunity.

Palace should have doubled their lead five minutes into the second half but Marc Guehi failed to hit the target with a close-range header.

Within the space of two minutes, both sides had goals ruled out for offside. Zaha thought he scored his second of the day but his strike was disallowed.

Moments later, Gabriel Jesus put the ball in the back of the net but after a lengthy VAR check, the goal was ruled out as Phil Foden was offside in the build up.

With two minutes remaining, Gallagher sealed an impressive win for Palace with a curling finish past City goalkeeper Ederson.