Tension rises in South-East, military begins operation against killings, others - The Naija Weekly

Tension rises in South-East, military begins operation against killings, others 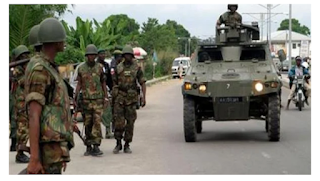 The military on Monday began an operation in the South-East as part of efforts to address rising insecurity in the region.

The Army indicated this at a press conference in Awka, the Anambra State capital as soldiers and policemen  paraded the streets of Owerri, the Imo State capital, in a show of force on Monday.

In Enugu, the Enugu State capital,  hoodlums had a field day as they were on the rampage in the process of enforcing the sit-at-home order which  the Indigenous People of Biafra said it had suspended.

There has been worsening insecurity in the South-East since the IPOB leader, Nnamdi Kanu, was arrested in June.

Last week, nine persons including Dr Chike Akunyili, the widower of the late Minister of Information, Prof Dora Akunyili, were  killed  by gunmen at Nkpor in the Idemili North Local Government Area of Anambra  State.

On Monday, violence continued in Enugu where  hoodlums attacked and set ablaze a tricycle for allegedly disobeying the  sit-at-home order.

It was gathered that hoodlums operating in a Hilux van moved round some parts of Enugu on Monday morning to enforce the sit-at-home order.

The sit-at-home continued to take its toll on the businesses and social activities in the state.

Residents of the state once again stayed in their homes while some miscreants continued to create fears by attacking those who disobeyed the sit-at-home order.

It was gathered that a tricycle was set ablaze  at Amachi Road Junction, Agbani Road despite security assurances by the state government.

There was panic in Owerri, the Imo State capital, on Monday as news filtered in that a group of gunmen were on the rampage.

Schools, markets, banks and eateries immediately shut down as residents ran for their lives.

While parents and guardians rushed to withdraw their children and wards from schools, all roadside shops and motor parks were deserted.

Vehicles that were on transit when the news broke reversed and discharged their passengers.

One of our correspondents saw parents withdrawing their children from Orji Primary School, as students of Imo State University deserted the campus.

A parent who refused to disclose his identity told one of our correspondents that his neighbour told him that hoodlums were going to schools to attack pupils, saying that it was a huge risk to allow his children remain in school considering the current situation.

The PUNCH observed that the panic situation, which began at about 10 am, was as a result of Operation Show of Force embarked upon by the army and police in the state.

The situation forced vehicles owners, and barrow pushers to quickly leave the roads and streets just as road side traders also took to their heels.

The state Commissioner for Information and strategy, Declan Emelumba, said the stampede was uncalled for, adding that the security operatives were on Operation Show of Force in the state capital.

The exercise, according to the Commander 302 Artillery Regiment (General Support) Col Abdulkarim Usman, will help to combat insecurity in the state and foster inter agency cooperation.

He said that the rise of insecurity across the country had made it imperative that the Nigerian Army needed to come in to assist.

Usman said, ”The military will use the golden opportunity in conjunction with other security agencies to curb the existing security threats in Anambra State.

“The threats range from secessionist agitations, by the Movement for the Actualization of Sovereign State of Biafra, the Indigenous People of Biafra, and Eastern Security Network.

“Others are banditry, kidnapping, cultist activities, land disputes clashes, communal clashes, chieftaincy issues, assassinations and youths restiveness. To curb these countless security challenges, a robust posture in what the unit has always maintained”

The launching of the military operation was held as The PUNCH learnt that South-East governors and some selected Igbo leaders would be meeting on Tuesday (today) in Enugu to discuss the crippling effects of the sit-at-home and the detention of Mazi Nnamdi Kanu by the Federal Government.

Sources told our correspondents that the meeting would discuss how to negotiate Kanu’s trial through political means.

A circular for the meeting, the Chairman of the South-East Governors’ Forum and Governor of Ebonyi State, Chief David Umahi, sent to leaders invited for the event,  appealed to the governors to be physically present in the meeting and avoid sending representatives.

The circular, which our correspondent obtained on Monday, was titled, ‘There will be a meeting of the leaders of the South-East Zone on Tuesday, October 5 in Enugu’.

The Southern and Middle Belt Alliance has called on the President, Major General Muhammadu Buhari (retd.), and all south-eastern governors to identify and apprehend sponsors of the “unknown gunmen” who are unleashing terror in the region.

The call was contained in a statement by the group on Monday titled, “Insecurity: SaMBA requests Buhari as a matter of urgency to Identify and arrest sponsors of “unknown gunmen” in the South-East”

SaMBA in the statement signed by its Spokesperson, Mr. Rwang Pam, appealed to Buhari to take immediate steps to tackle the growing menace of violence in Anambra State and the entire South-East region.

It further advised the soldiers to conduct the exercise with restraint and respect the  human rights of civilians.

Part of the statement read, “Recent activities of the so-called “unknown gunmen” in Anambra State and the South-East in the past few weeks call for concern among peace loving Nigerians as the Federal Government has failed in its responsibility to protect lives and properties of citizens.

“Scores of lives have been lost and government and private properties worth billions of naira had been destroyed.

“The right to life is fundamental and basic right and it’s so entrenched in the 1999 Constitution of Nigeria (as amended) in Sec 33, which clearly states “that every person has a right to life and no one shall be deprived intentionally of his life, save in the execution of the sentence of a court in respect of a criminal offence of which he has been found guilty in Nigeria.”

Likewise, Section 14 (2b) states that “the welfare and security of the citizens shall be the primary purpose of government.”

“This government has failed in that duty and continues to fail until it fulfills its responsibility to all Nigerians.

“It is heart breaking that recent happenings in Anambra State and the South-East at large, have breached this right.”