THE BATTLE FOR AKỌGUN (PART 1) - The Naija Weekly

THE BATTLE FOR AKỌGUN (PART 1) 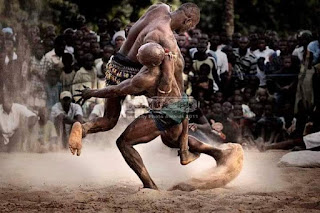 The world we live is a battlefield. We are all warriors fighting one battle or the other. There is no certainty who will die and who will live. That is how warriors approach live. They live for today and the now. They strive for what they can get in the present. They are not much encumbered by morality. They take what they think is theirs by being the warrior, the bully, the alpha male and the dominant one. The story you are about to read shows all these. Life is precarious, sound judgement, action and timeliness; these are the three watchwords of a warrior.

It was late in the dry season of that year. We were returning from a raid into the Ànàgó countryside. We were successful in our raid. I could count slaves in their hundreds securely bound and led by our ìlàrí. These were former slaves who had proved themselves worthy of being in the army of Kábíyèsí. Onikòyí was our General. I could see him in the middle of the hoard as we head back to Ọ̀yọ́ Ò̩rò̩. We were in high spirit. Kábíyèsí will not only be happy with us, he will definitely promote some of us to higher ranks in his army. I started daydreaming about the day I will become lieutenant to Onikoyi himself. He is our Balogun. His lieutenant is Ako̩gun. All the hamlets we met on the way were all deserted. Ologini t’ajo de, ekute ile ti be lu’gbo.

Then words came to me that Balogun said we need to camp for the day. I was a little surprised at this because the sun is about to get to the center of our head, but I quickly hid my surprise. We normally travel very early in the morning till the evening, but given that we have left the canopy provided by tropical rain forest trees and we are in the open grassland on our way home, it is difficult to travel under the scorching sun of tropical Africa at noon. The sun was bad for horses that had been going on a long distance and also the slaves that had trekked the way since morning. We all needed a respite.

However, for me, I wanted us to camp quickly on our way for different reason. I could not but smile when the order to halt got to me. My reason, I must say, was libidinous. I have caught a pretty girl of about 16 years of age among the slaves I was able to catch with my squad. Being the head of the squad, I have the sole right to do whatever I like with any of the female slaves so far I am not killing them. More, this girl was so beautiful I could not take my eyes off her.

I told my loyal slaves which I have promoted to my ìlàrí to quickly gather all the grass they could to build makeshift tents and huts for the night. While they were doing this I consulted other gang leaders and we deliberated on how we are going to share the spoils of war we got. We know all slaves belong to Kábíyèsí and he chooses whom to give one or two slaves, however, the cowrie money we got from slain enemies, the Iron, bronze, animals like bulls and fowls of different species we captured, all these belong to us except Kábíyèsí has interest in particular one.

By the time I returned to the spot I chose for my people, they had cleared bush and made four tents and a hut for me. One each to the north, south east and west, then the largest one was the hut in the middle and belongs to me. I nodded in approval of what they did. I don't need to tell them before they make these makeshift tents and hut once the need arises. Two of my ìlàrí were dwarfs. I take them to wars and raids like this because they are source of entertainment to me and they have been loyal to me so far. They are my ears too.

So I called on the two to entertain me in mock fight. They always act out historical fights between legends of Onikoyi squad. And they exaggerate everything just to make us laugh. Today they acted the fight between Alápótabírán and Apọ̀funyọ̀yọ̀, both of whom were from Onikòyí clan like me. I could still remember the fight, which is normally done after a successful raid to celebrate or to choose the next Akọgun in our midst. Alápótabírán carried the day and was given the tittle of Akọgun Onikoyi and a damsel to have for the night. He immediately removed the loin clothe of the lady and laid her in the presence of the people. The people were in rapturous ecstasy as this is what is expected of Akọgun. He must be able to fight well in battle, fight well in Ìjàkadì and lastly must be able to make woman cry for joy in the inner room.

News got to us later that the call for the fight was ill motivated and not because of show of mastery in wrestling but because Alápótabírán had being eyeing the prized lady who belonged to Apọ̀funyọ̀yọ̀ by right of conquest. Well, the gods are blind to the world of warriors, otherwise justice of the universe would have ensured that Apọ̀funyọ̀yọ̀ carried the day. The world we live is a world of uncertainty. You don’t know if you will come back from the next war. Even in the comfort of your home, you still fight cold wars of envy and back-biting. Only the survivor is right, so you must do everything you can to survive.

Anyways, my dwarfs acted out this story very well except when the one who acted Alápótabírán brought out his diminutive phallus and all the girls started laughing. We all laughed together because we wondered what can his small manhood do to the big bootied lady that acted the prized damsel?

This act brought me back to my prize damsel I have among the slaves. I have to lay her tonight, some of the gang leader may have been eyeing her as well. No, I won't wait till night. I have to lay her right now. She belongs to me by right of conquest and even if I keep her till we get to Ọ̀yọ́, Kábíyèsí could "lay his leg on her" as the Emperor.

I looked at the direction of where she sat among the slaves forming the crowd. I saw her smiling at the small prick of the dwarf Alápótabírán. I smiled too. She will soon see the grandfather of that manhood. I signaled to my aid to bring her to my hut. He went to pick her immediately. I can have her among the crowd if I wish, but I just want to relish her youthful sweetness in the confines of my hut.

She must have been briefed by the elderly women among my slaves. For I could see she put little resistance and followed my deputy as he tried to drag her. Everybody went on with the entertainment.

In the hut I removed the strip of clothe covering her. Big succulent breasts stared at me. I hungrily jumped at them and took her down. To my surprise she was still a virgin! Such a rare prize. In a minute I was already inside her despite her cry. Yes, she belongs to me and I could do whatever I like with her. But the very act of having her that day became what I will live to regret for the rest of my life.