THE INTERESTING STORY TO KNOW ABOUT IJĘBU TRIBE. - The Naija Weekly

Home Article THE INTERESTING STORY TO KNOW ABOUT IJĘBU TRIBE.

THE INTERESTING STORY TO KNOW ABOUT IJĘBU TRIBE. 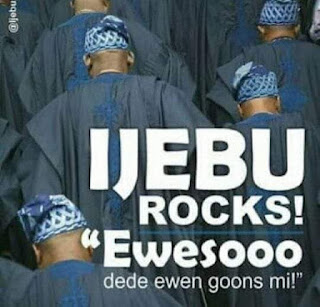 THE INTERESTING STORY TO KNOW ABOUT IJĘBU TRIBE.

They are bounded in the North by Ibadan, in the East by Ondo and Ilaje̩, and in the West by E̩gbaland.

As it is with most other tribes, there are usually different accounts of their origin with one account being more prominent than others. The case is not different with the Ije̩bus.

A historical account suggests that the people of Ijebu are direct descendants of Oduduwa, the son of King Lamurudu, who was expelled from Mecca some 1500 years ago.

However, the people of the tribe annul this claim on the ground that the account meant all Yorubas came into existence as one single group whereas this is not the case.

The widely accepted account among the Ije̩bus is that, they have their descent from Sudan. This is a claim which seems to be corroborated by a Haile Mariam publication: “the most powerful people that the Negede Orit (Ancient Ethiopian Africa) met in East Africa were the Ije̩bus.”

Negede Orit’s sojourn into Ethiopia was several centuries before King Solomon and Makida, the Queen of Sheba, where he met the Ije̩bus (maybe the biblical Jebusites?) on the East Coast of Southern Sudan.

The ancestors of the Ije̩bus came into Nigeria from Owodaiye Kingdom of Ethiopia (now Waddai). Owodaiye Kingdom was bounded in the East by Tigre and the Kingdom of Axum; in the North by Nubia; in the South-Eastern border by the land of Punt, with no clear boundaries in the West.

The following are evidences to further assert this ‘Sudan origin’ account:

The tribal mark of the Ijebus is similar to that of the Sudanese. This tribal mark in form of three vertical marks on both sides of the cheeks found on the faces of every Ije̩bu indigene is the same as that on the Sudanese.

The Ije̩bu dialect is similar to the original language of the Sudanese which has now been superseded by Arabic language. Common similar names are Esiwu, Saba, Meleki.

A musical flute formerly used during the coronation of the Awujale̩ is still in use in Ethiopia and Southern Sudan.

The Ije̩bus share similar cultures and religion such as funeral rites, Age̩mo̩ cult and Erikiran shared with the Egyptians, Nubians, and the Puntites.

The Ije̩bus are known for their industry, sagacity and thriftiness. Although this has been mistaken for stinginess by many, in the real sense, an average Ije̩bu indigene merely operates by the “do not eat with your ten fingers” axiom.

They are quick to spot opportunities and equally seize such opportunities as an avenue to make some money. Monies made are thereafter reinvested to yield some more money and the cycle keeps going on.

Not surprisingly, the Ije̩bus had gained prominence in the business world by the nineteenth century, suffice to add that, they were the first to make cowry shells as a means of exchange (currency), and were also the first to produce coins called ‘Pando̩ro̩’, which was widely accepted throughout Africa and by the Europeans.

Quick fact:  Mike Adenuga is the first Nigerian to singlehandedly own oil mining and telecommunication companies while Mrs Fo̩lo̩runs̩o̩ Alakija is one of the richest women in the world. They are both from Ije̩bu.

The people of Ije̩bu are known to enjoy life to the fullest. Albeit working hard, they celebrate well too. Two important celebrations are very dear and very important to the Ije̩bus. The marriage of their children and the burial of their parents.

The government of Ije̩bu land is complex and highly organized. With the capital at Ije̩bu Ode, the Awujale̩ is the paramount king in Ijębu land.

The following are the major towns in Ije̩buland: