The Olu of Warri, Ogiame Atuwatse III, yesterday, abolished the traditional title of Ologbotsere in Warri Kingdom. - The Naija Weekly 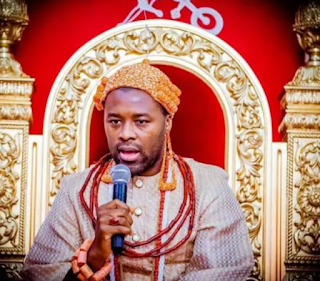 He said the erstwhile holder of the title should no longer be addressed as such across the Kingdom and other parts of the world.

With this pronouncement, Ayiri Emami is no longer Ologbotsere of the kingdom.

The monarch made the pronouncement before descendants of the Ologbotsere family at a meeting in his palace.

The monarch, at a meeting with Ologbotsere descendants said, “We have taken time to ponder and have arrived at our final decision”, and called on Chief Brown Mene, to read out his position.

Mene, on his part, harped on the high regards the monarch has for the Ologbotsere descendants and stressed that many of them were titled chiefs of the kingdom.

He reiterated that the abolition of Ologbotsere title had not in any way denied the family members of chieftaincy titles in the kingdom, saying, “The monarch called you, because of the respect he has for the Ologbotsere descendants.

“It is the king that gives chieftaincy titles. It is also the king that withdraws titles. This is the tradition. There are several of Ologbotsere children that are chiefs. The Ologbotsere family is very dear to to the monarch.