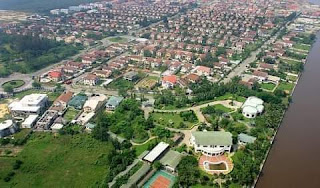 Lagos tops the list of the top 10 richest states in Nigeria. It is also the most developed state in Nigeria. It is located in the South West region. It covers 3,577 square kilometre and its GDP is $33.68 billion. Lagos State is arguably the most economically important state of the country, containing Lagos, the nation's largest urban area. It is a major financial centre and would be the fifth largest economy in Africa, if it were a country.

This is one of the richest states in Nigeria. It covers an area of 11,077 square kilometres. The population of Rivers is 5.2 million people, and its GDP is $21.17 billion. The region is rich in vast reserves of natural gas and crude oil. More than 60% of Nigerian crude oil output. Moreover, Rivers also houses Port Harcourt.

Delta is located in the South region of Nigeria. The overall population of the region is 4.1 million people. Its GDP is $16.75 billion. It is rich in natural resources, like limestone, decorative rocks, tar sand, kaolin, lignite, silica and industrial clay. Delta also has one of the largest deposits of crude oil and natural gas in Nigeria.

Oyo is located in the South West region of Nigeria. It is one of the top 20 richest states of Nigeria. The overall population of Oyo is around six million people. Its GDP is $16.12 billion. The major part of the economically active population works in the agricultural sector. Oyo produces cashews, palm oil, cocoa, plantains, rice, millet, cassava, yam and maize.

Imo is located in the South East of Nigeria. Its GDP is $14.21 billion. Imo is rich in natural resources, like zinc, natural gas, crude oil, lead, limestone, fine sand and white clay. There are over 163 oil wells in Imo. The main petroleum companies in the region are Agip, Royal Dutch Shell, Chevron Corporation and Addax Petroleum.

Kano's estimated population is around 11 million people with a GDP of $12.39 billion. Kano is a major producer of skins and hides. It also produces chili pepper, gum Arabic, garlic, cotton, soybean and sesame.

Edo's capital is Benin City. The total population of Edo is 3.5 million people with a GDP of $11.89 billion. Edo is famous for its tourist attractions, like the Emotan Statue in Benin City or River Niger Beach and Ise Lake in Agenebode.

Akwa Ibom is located in the South of the country. Its total population is 5.5 million people. The region is home to the word class information centre – the Ibom E-library. The main ethnic groups in Akwa Ibom are the Ibibio, Annang, Oron, Eket and Obolo. Its GDP is $11 billion.

Ogun is located in the South West region of the nation. The overall population is around four million residents. The region is notable for a high concentration of factories, like Procter and Gamble in Agbara, Coleman Cables in Arepo, Lafarage Cement in Ewekoro, Dangote Cement in Ibese. Its GDP is $11 billion.

Kaduna is located in the Northern Central part of the country. Its total population is 6.1 million people. Kaduna is one of the most multicultural states in the nation with more than sixty various ethnic groups living here. Its GDP is $10.33 billion. The major part of the economically active population works in the agricultural sector.