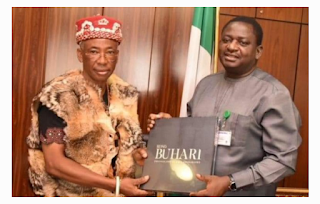 The Ezeani II of Mmaku Kingdom in Enugu, Maduabuchi Nevobasi, has promised President Muhammadu Buhari the support of Igbos in the South-East.

During a visit to Femi Adesina, Special Adviser to the president on Media and Publicity in Abuja, Mr Nevobasi said, Mr Buhari will always be welcomed to the region.

Describing the civil war as a “war of unity”, Mr Nevobasi said aside from his unifying role in the war fought against the Igbos, Mr Buhari had done many things for the Igbos.

“Look at the Second River Niger Bridge, which is going on at a frenetic pace. Enugu International Airport has a brand new runway and is now in use.

“The Enugu-Port-Harcourt Expressway, Onitsha-Enugu road, and many others are also things to point at in the region,” the traditional ruler told Mr Buhari’s spokesperson.

Mr Nevobasi who gave the traditional title of Isimmri 1 of Mmaku (Main Source of Water) to Mr Buhari in 2018, praised the president’s “admirable strides” in fighting corruption.

Commending Mr Adesina, the traditional ruler said, “We appreciate what you have been doing. We ask God to protect and reward you for your love and dedication.”

He said Mr Buhari had the support of the Igbos despite his handling of the many security challenges in the region and across Nigeria.

“It has not been easy due to many challenges, particularly security, but the good work continues. Igbos would always welcome and support him, and we urge him not to relent in his efforts to keep the country together,” Mr Nevobasi said.