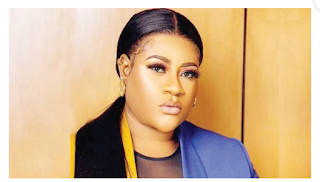 The actress, who has been noticeably absent on social media, also deleted or removed all her Instagram posts in honour of her mother whose death was announced on September 23 by her colleague, Toyin Abraham.

A quick check on Blessing-Sunday’s page showed only two photos of her late mother accompanied with an emotional tribute. The tributes read, “One thing my mother’s death taught me is not to stop being good.  All my years of being extremely nice to all and sundry is paying off, I remember making a post one time that I am the one always doing for people, no one has ever done anything for me, but fast forward to this moment, I am not even spending one kobo of my money. Not like I even have but God will embarrass you all with blessings. My thank you post will come after the burial because, of a truth, people stood up for me.”

The burial was well attended by her colleagues, friends and family who have been sharing video clips of the event on their individual social media handles.

In one of the clips, Blessing-Sunday passed out when her mother’s coffin was brought out by the pall-bearers. Friends and family, who witnessed the incident, could be seen trying to resuscitate her. The very emotional actress who apparently shared a very close relationship with her late mother was also seen crying uncontrollably on her mother’s coffin and passionately professing her love to “Mama Nkechi, as she fondly calls her. She was heard saying, “Leave me alone and don’t tell me not to cry. Mama, you left me alone, I thought you are going to wake up today. I love you so much, please do not let these wicked people get me, please, watch over me and my siblings…”

In other clips, the actress was seen dancing with well-wishers like Toyin Abraham, Iyabo Ojo, Woli Arole, Pretty Mike and many others present at the event.

Blessing-Sunday is undoubtedly one of the most vocal female celebrities who has experienced her fair share of controversies over the years.