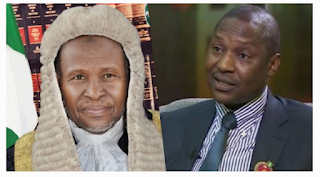 The Attorney General of the Federation, Abubakar Malami has said to the ECOWAS Court that the national security of Nigeria trumps the Nigerian Constitution, especially the fundamental rights section of the governing document.

Although the 1999 Constitution (as amended) has long been seen as the supreme document from which all powers, rights and privileges are derived in Nigeria’s constitutional republic, Mr Malami listed several grounds under which the Constitution could be usurped for the overall security of the country.

Mr Malami made his argument in the 17-page defence document filed before the court on September 27, citing a previous legal opinion of Chief Justice Ibrahim Tanko Muhammad.

Mr Muhammad, who was appointed head of Nigerian Supreme Court just before 2019 polls after President Muhammadu Buhari controversially removed a Southern Christian from the top judicial seat, had argued in 2007 that fundamental rights component of the Constitution can be discarded because Nigeria can not exist without national security.

“Where national security is threatened or there is the real likelihood of it being threatened, human rights or the individual right of those responsible takes second place. Human rights or the individual rights must be suspended until national security can be protected or well taken care of,” Mr Muhammad argued in the June 8, 2007 Supreme Court ruling the prosecution of Asari Dokubo, who led a group of Niger Delta militants seeking economic libration at the time.

While defending the regime’s June 4, 2021, ban on Twitter, Mr Malami cited Mr Muhammad’s 2007 legal opinion as the basis for the ban, which has been widely criticised as repressive and unconstitutional. The attorney-general’s position was in the defence affidavit filed in the consolidated lawsuit of activists and media houses, Amnesty international and Peoples Gazette, challenging the Twitter ban.

The regional court has set January 2022 for ruling on the matter.

Mr Buhari’s had similarly echoed Mr Muhammad’s 2007 legal opinion when he appeared at the national conference of the Nigerian Bar Association in 2018. Mr Buhari said at the time that the rule of law was inferior to national security and his government would continue to trample on citizens’ fundamental rights in order to protect the country’s security.

The comments at the time elicited nationwide condemnation, with rights attorneys saying the president grossly misrepresented legal concepts to justify his record of rights abuses and defence of extra-judicial executions of Nigerians.