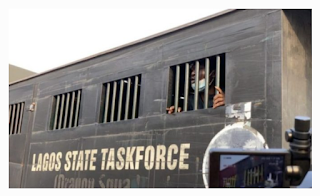 Officers of the Lagos State Police Command on Wednesday arrested two protesters who joined in the commemoration of the first anniversary of the #EndSARS protest at the Lekki toll gate.

The state government had vowed to clamp down hard on protesters, however, many youths stormed the Lekki toll gate for a memorial of the October 20, 2020 protest where soldiers opened gunfire on peaceful protesters.

One of the protesters, whose name is yet to be identified, was mistreated and dragged into a police truck while he granted interview.

While still speaking, police officers in their numbers surrounded him, dragged him into their truck as they yelled “arrest this guy”.

Another protester identified as Okechukwu Peters was quoted as saying “remember those that were killed” as he was taken into a truck belonging to the Lagos State Task Force. His mobile phone was seized by the police according to the news outlet.

The state police had deployed tens of trucks and several personnel from the Task Force, Rapid Response Squad, Ajah Area Command and Divisional Police Stations to prevent the protest from holding in the area.