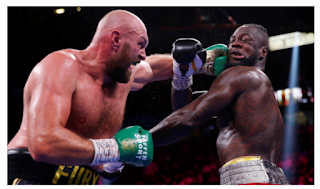 In what was a fight of the year contender, and possibly an all time classic, Tyson Fury stopped Deontay Wilder in the trilogy at the T-Mobile Arena, Paradise, Nevada, Sunday morning.

The fight started with an entrance delay from Wilder who took about 20 minutes to get in the ring, before Fury made his own dramatic entrance complete with gypsies and an amour.

Wilder started the fight very very fast, establishing his jab and working the body as he came forward but by the end of that round and for much of the second, Tyson started to find his range.

In the third round, it looked to be the beginning of the end as Fury dropped Wilder who already seemed to be gassing but he did well to make it to the stool.

The fourth round provided even more drama as Wilder almost made an all time comeback by dropping Fury not once but twice in the round to almost finish the fight.

Fury was lucky to make it to the end of the round. Things settled in the fifth round as Wilder was looking for the finish but Fury seemed to have cleared his head. Fury started to take charge by the sixth round and it was mostly one way traffic from there on out.

Deontay Wilder showed a lot of heart to survive the eighth, ninth and tenth rounds, surviving another knockdown from Fury.

By the eleventh round, the fight was all but done and once Fury landed another clean right, Wilder dropped and this time, the referee didn’t do a standing count, the fight was waved up and Tyson Fury retained his WBC Heavyweight Championship, earning his first defence.