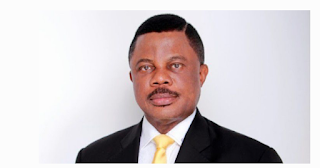 Governor Willie Obiano has described as “unfortunate” the threat by Attorney General Abubarkar Malami that a state of emergency could be imposed on Anambra over escalating violence.

Mr Obiano spoke to journalists at the State House, Abuja after his meeting with President Muhammadu Buhari on Thursday.

He said he had come to brief the president on security challenges facing the state.

When asked for comments on Mr Malami’s threat on the Anambra situation, Mr Obiano said:

“I also reported that to the President and this is not in the books of the president because he knows that Anambra has been the safest state in Nigeria for seven years plus.

“Even to contemplate a state of emergency is unfortunate, look at what is happening in the north; they kill dozens every day. Because less than 15 people were killed in Anambra in two weeks, is that a reason for somebody to call for a state of emergency?”

“That’s a very unfortunate comment by Malami. I will call him to express reservation on those kinds of comments, he shouldn’t try that,’’ he emphasised.

Mr Malami, on Wednesday, warned that the Buhari regime may be forced to impose a state of emergency in Anambra to ensure peaceful conduct of the forthcoming gubernatorial election in the state.

Mr Obiano, however, dismissed the contemplation of declaring a state of emergency in his state.

“These invaders from outside Anambra state, from the neighbouring towns, we are going to deal with them. We’re already working, there’s nothing,” he said.

“We’ll overwhelm and conquer all these miscreants that came from other states nearby to come and harass Anambra people.”

While comparing what is happening in the North-West and North-East to incidents in Anambra, the governor said:

“What we have in Anambra is malaria, so you don’t have to use a sledgehammer to kill that. We are not near, in terms of confusion and security challenges, compared to Zamfara and co, so they are not good examples.”

The governor said military response to the violence in Anambra must be proportionate.

“The Army, police, Navy, other arms-bearing people should consider the quantum of force to use.

“As a strategist, you don’t sit down here and order the army to carry the whole army in Nigeria to go to Anambra,” he said.