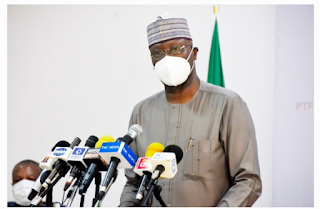 The chairman of PSC on COVID-19, Boss Mustapha, disclosed this during a press briefing in Abuja.

Mr Mustapha said the move was to encourage the vaccination rate across the country.

According to him, from December 1, federal government employees will be required to show proof of COVID-19 vaccination or present a negative COVID-19 PCR test result.

He added that this was to gain access to government offices in all locations within Nigeria and missions. He added that an appropriate service-wide advisory/circular would be issued to guide the process.

He advised Nigerians to increase vigilance during the festive period.

“The PSC wishes to put Nigerians on notice that two major religious festivities (Sallah and Christmas) are approaching, and we shall be experiencing increased passenger traffic in and out of the country,” stated Mr Mustapha. “Similarly, events of large gatherings are likely to hold. While the PSC prepares to escalate surveillance and other control activities, we urge States and all Nigerians to also increase their vigilance and take measures to moderate activities.”

According to him, statistics generated over the last four weeks on testing showed that the trend of infection is going down in some states while the trajectory is upward in others.

Mr Mustapha, however, said the decision to remove South Africa, Turkey, and Brazil from the restriction list had been made.

The PSC had restricted Turkey, Brazil, and South Africa due to the upsurge in the number of COVID-19 cases.

According to him, four countries were placed on a high-level restriction for travellers from such countries over several months.

‘’The PSC has, after a review of the developments in these countries, decided to remove South Africa, Turkey, and Brazil from the restricted list. ’The honourable minister of aviation today presented the position of African countries on Vaccine Passport which some economic blocks and countries wish to impose for travel purposes,” Mr Mustapha explained. ’’This is because African countries have found it difficult to access the vaccines for their citizens in sufficient number.’’

He also noted that ‘the UK has eased restrictions on fully vaccinated travellers from Nigeria to the UK from October 11.

‘’Nigeria welcomes this development and assures that the PSC shall continue to review Nigeria’s protocols based on global developments, science, and national experience. A revised protocol will be issued in the next 24 hours,“ he added.