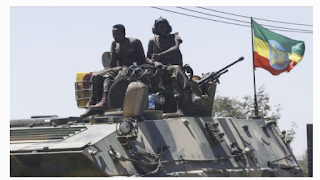 The U.S. is considering the full range of tools at its disposal, including using economic sanctions, to respond to the worsening crisis in northern Ethiopia, State Department spokesman Ned Price told reporters on Tuesday.

Secretary of State Antony Blinken held high-level meetings on Ethiopia on Tuesday, including with officials from the African Union, Sudan, the UK, France, Germany, and the European Union.

Washington, the EU, France, Germany, and the UK called on the parties to immediately enter into negotiations toward a ceasefire and end abuses.

“They also called on the parties to the conflict to adhere to international law and allow unhindered delivery of humanitarian assistance to all who are suffering in Ethiopia,” Mr Price said in a statement.

Washington has repeatedly called for a negotiated end to the conflict in the northern region of Tigray between federal forces and those aligned with the TPLF.

Since the conflict erupted in November, thousands have been killed, and more than two million have fled their homes.

Fighting spread in July from Tigray into the neighbouring regions of Amhara and Afar, displacing hundreds of thousands of people.