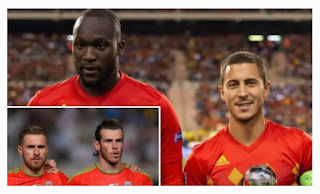 Belgium must wait to confirm their place at the 2022 World Cup in Qatar after Wales maintained their chance of automatic qualification with a 1-0 win at Estonia on Monday.

Kieffer Moore struck the only goal for Wales, who are third in Group E, five points behind Belgium.

Belgium did not play qualifiers in this international break due to their UEFA Nations League participation.

The Czech Republic, who won 2-0 in Belarus, are ahead of Wales on goal difference but, having played a game more, cannot catch Belgium.

The Belgians nonetheless will expect to secure qualification at home to Estonia next time out.

“It was important to come here and get the points. Now we can prepare for the games in November, and it’s all in our hands in front of our supporters,” Wales captain Aaron Ramsey said.

Wales conclude with a double-header at home to Belarus and Belgium with four points guaranteeing a play-off place as runners-up.

In Group H, Russia and Croatia confirmed they will finish in the top two with the only question for November who qualifies automatically and who enters the play-off.

Andrej Kramaric and Luka Modric twice levelled for Croatia in a 2-2 home draw with Slovakia while group leaders Russia won 2-1 in Slovenia.

Russia are top by two points but, after both have winnable games to resume in November, visit Croatia to conclude the group.

But Norway are two points behind them after beating Montenegro 2-0, and Turkey, 2-1 come-from-behind winners in Latvia, are two further back with two games to play.

Turkey finish against Gibraltar and Montenegro, though, so could be well placed to take advantage when Norway visit the Netherlands in the final round.