We had peace during Shagari, Yar’Adua days: Ohanaeze Ndigbo - The Naija Weekly

We had peace during Shagari, Yar’Adua days: Ohanaeze Ndigbo 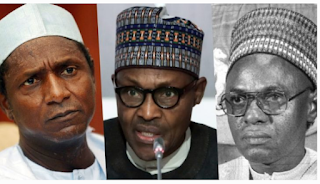 Ohanaeze Ndigbo has challenged the country’s leadership to do better in addressing challenges of insecurity.

Damian Okeke-Ogene, vice president of the apex Igbo socio-cultural organisation, made the call during an interview with the News Agency of Nigeria in commemoration of Nigeria’s 61st Independence anniversary.

He asserted that ethnic inter-ethnic relationships among Nigerians have become worse under President Muhammadu Buhari when compared to previous presidents of his ethnic Fulani origin.

“Nigeria needs a leader who will accommodate all the ethic groups of the nation. During Shagari and YarAdua, we had relative peace, so Nigerians should pray for good leadership,” Mr Okeke-Oghene said.

Mr Buhari has long been cast as an unapologetically clannish leader who has refused to outgrow his primordial sentiment despite leading the country as a military dictator nearly four decades ago.

Many believe his nepotistic stance has fuelled secessionist agitations around the country with Indigenous People of Biafra threatening a breakaway and Yoruba Nation agitators clamouring for separation.

In the North-Central state of Benue, a state predominated by ethnic Tivs and Idomas, Governor Samuel Ortom has severally accused Mr Buhari of siding with his ethnic Fulani herdsmen to kill and maim farmers in his domain over their stance against invasion by the nomadic pastoralists.

Mr Okeke-Ogene said that Nigeria as a nation still yearns for good leadership, and that the moment it gets quality leadership, peace and development will naturally exist.