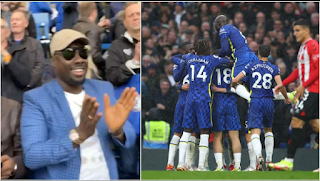 The Blues ran riot against the Saints on Saturday following a 3-1 win courtesy goals from Trevoh Chalobah, Timo Werner and Ben Chillwell as Ward-Prowse got a goal for the visitors.

Southampton were reduced to 10 men in the 77th minute after James later turned villain after being red-carded.

Before the encounter, Ob Cubana had shared clips of himself at a famous clothing store in London as he shopped.

The suit looked perfect on the 46-year-old who made way to the Stamford Bridge immediately and cheered the Blues as they claim all three points to go top of the Premier League standings. Obi Cubana wrote:

“Ok, lemme confess! I was a staunch Chelsea fan before before. I think I’m back home.”