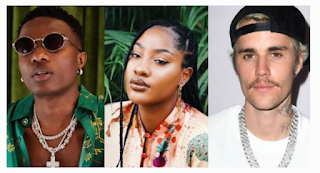 The duo received the Recording Industry Association of America’s Platinum plaque on October 4, in Los Angeles.

This means ‘Essence’ has sold over a million units.

Barely a year after the song was released, the outstanding collaboration topped all the charts, including Billboard Top 100 and has now hit platinum.

This makes ‘Essence’ the first Afrobeat song to hit platinum within a year.

The track was released in October 2020, alongside other remarkable songs in the ‘Made in Lagos’ album by Wizkid.

Recently released ‘Essence Remix’ featuring Tems and Justin Bieber is currently one of the most streamed African songs of this decade on Pandora with over 5,260,403 streams.