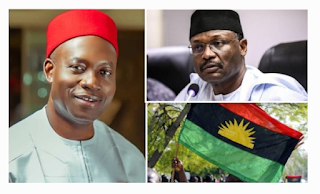 The Independent National Electoral Commission (INEC) has blamed IPOB for the low turnout of voters in the November 6 governorship election declared inconclusive.

“There is a whole state of fear that has been created by the politics of agitation for a separate state in this part of the country,” Sam Egwu, INEC’s supervising resident electoral commissioner to Anambra, told Channels TV Sunday evening. “IPOB has been able to enforce the sit-at-home order over time. So the fear of IPOB has become the beginning of wisdom.”

Speaking on the impact IPOB had on the turnout, he noted, “We have had a problem with extremely low voter turnout. The voter turnout, I think, if you are scientific in terms of what we are seeing in many local governments, you are actually dealing with less than 25 per cent voter turnout, and this is not really good for our democracy.”

In the early hours of Monday, INEC postponed the Anambra governorship election until November 9.

Returning Officer Florence Obi said the election did not hold in Ihiala LGA and would be difficult to announce the winner due to insufficient margin of victory for the leading candidate Charles Soludo.

Mr Soludo’s APGA has maintained a comfortable lead over his main challengers in APC and PDP, but Ihiala has more registered voters than the margin between APGA and its runner-up PDP.

Elections were held in 20 of the state’s 21 local government areas on Saturday. Technical glitches, logistics, and uncertainties over security did not allow residents of the local government to exercise their franchise, officials said.