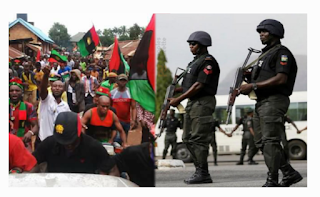 “The overriding objective of our operational action plan is to ensure an environment that is peaceful enough to encourage the law-abiding people of Anambra state to exercise their electoral franchise,” Mr Baba pointed out. “However, for the destabilising elements and other deviants who, despite all wise counsels are determined to deploy violence and other illegal means to advance their political interests or constitute a clog in the wheel of peaceful atmosphere for the election.”

He added, “They should be prepared for the consequences of their actions as they will be identified, isolated, and decisively dealt with irrespective of their status, ideological inclinations, or political affiliation.”

He stressed that the massive deployment of security operatives for the election is not to intimidate law-abiding citizens.

The IGP stated this at the Independent National Electoral Commission (INEC) stakeholders meeting on the Anambra governorship election in Awka on Wednesday.

According to him, the deployment of security operatives is to reassure the people of adequate protection by deterring misguided political elements and non-state actors bent on threatening the elections through acts of armed violence or other conduct that violate the Electoral Act.

“Aside from the optimal deployment of our intelligence assets to proactively frustrate any threat to the elections, we have also deployed a total of 34,587 police personnel for the purpose of protecting the personnel and assets of INEC, the electorates, and residents of Anambra state during the exercise,” added the national police chief.

Speaking further, he noted that “this figure will be complemented by the military and other security and intelligence agencies.”

Mr Baba also mentioned that “our election security is designed such that all the three senatorial districts, 21 local government areas, 326 wards, and 5,720 polling units across the state will witness adequate security coverage.”

He further noted that the massive deployment would also be a strong warning that the federal government was determined to bring subversive characters to justice.

The IGP disclosed that the election security management action plan would engender effective coordination among INEC, the police, military, and other security agencies.