AnambraDecides: One thousand policemen deployed in Ihiala - The Naija Weekly 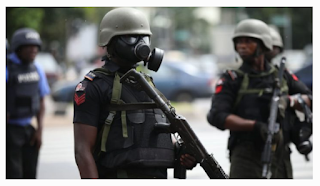 Anambra commissioner of police Echeng Echeng says over 1000 personnel have been deployed to Ihiala Local Government Area to ensure adequate security in the supplementary poll on Tuesday.

“We are deploying more than a thousand to the polling booths. This makes an average of three, four. They are going to be complemented by other security agencies,” Mr Echeng said in an interview with Channels TV on Monday night.

Officials said technical glitches, logistics, and uncertainties over security did not allow residents of the local government to exercise their franchise.

The police chief in Anambra added that the heavy deployment of police personnel to Ihiala would ensure maximum security as people cast their votes.

“All the tactical teams, Police Mobile Force (PMF) teams, we have pushed enough into Ihiala because we want to make sure that at every point that we anticipate a problem, we dominate the area. For whoever wants to come out tomorrow will have his own story to tell,” Mr Echeng further explained.

INEC on Monday announced that a supplementary election would hold between 10:00 a.m. and 4:00 p.m. on Tuesday (today).

In the early hours of Monday, INEC suspended result collation because the election did not hold in Ihiala.

Returning Officer Florence Obi said the election did not hold in Ihiala LGA and would be difficult to announce the winner due to insufficient margin of victory for the leading candidate Charles Soludo.

Mr Soludo’s APGA has maintained a comfortable lead over his main challengers in APC and PDP, but Ihiala has more registered voters than the margin between APGA and its runner-up PDP.

Elections were held in 20 of the state’s 21 local government areas on Saturday.