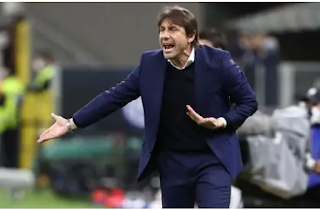 Antonio Conte has reportedly reached an agreement to take over at Tottenham Hotspur after the Premier League club sacked Nuno Espirito Santo.

According to Italian football journalist Gianluca Di Marzio, the former Chelsea and Inter Milan coach will arrive in London later today (November 1) and sign a contract with Spurs until 2023.

Spurs were in need of a new manager after sacking Nuno following the 3-0 defeat to Manchester United on Saturday.

Nuno lasted just 124 days in north London, with Spurs eighth in the table after 10 matches.

The 3-0 defeat to United at the Tottenham Hotspur Stadium was the final straw for Spurs.

Conte, 52, was last in charge of Serie A outfit Inter Milan. He led the Nerazzurri to a league title in 2020/21, however left by mutual consent at the end of the season.

A manager with Conte's resume was always going to attract interest, though, and several Manchester United fans were keen to see him replace Ole Gunnar Solskjaer following the Red Devils' recent run of form.

The 3-0 win against Spurs has bought Solskjaer more time, however, and it now seems as though Conte will become the Norwegian's rival.

However, results quickly fell off. Spurs were beaten by Chelsea, Arsenal, West Ham and Crystal Palace in the league, and by Dutch side Vitesse Arnhem in the Europa Conference League.

Results, combined with some drab football, contributed to Nuno's demise and he'll now be on the lookout for a new job.