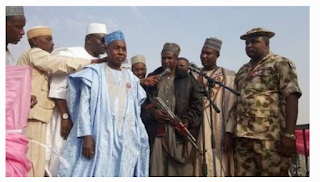 Governor Bello Masari’s government has set up a committee to secure statistics of its indigenes that fled to neighbouring states or countries due to security challenges.

Ibrahim Katsina, a special adviser to Governor Aminu Masari on Security Matters, disclosed this on Saturday in Katsina.

According to him, the committee is under the supervision of Deputy Governor Mannir Yakubu.

“The committee has already commenced its assignment; areas of need for assistance are being identified, especially with regards economic empowerment. There are widows and orphans; the state government has plans to empower those widows, while the orphans will be sponsored to go back to school,” said Mr Katsina. “Those that need medical support, as well as guidance and counselling, will also be assisted by the state government.”

He, however, explained that the priority of the state government was how to bring an end to the security challenges, adding that without checking the menace, all rehabilitation efforts would be an exercise in futility.

He expressed optimism that the government’s efforts would fast-track community reintegration of victims and their problems addressed.