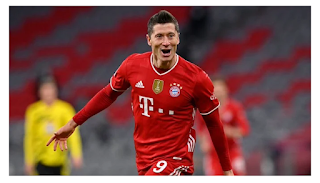 Bayern Munich opened a four-point lead at the top of the Bundesliga Saturday with a 2-1 home win over Freiburg, who suffered their first defeat in any competition this season.

Leon Goretzka put Bayern ahead with half an hour gone at Munich’s Allianz Arena before Robert Lewandowski bagged his 13th Bundesliga goal this season to make it 2-0 with 15 minutes left.

Bayern have now scored 100 goals this calendar year, one short of the record for a German club, set when Cologne netted 101 times in 1977.

Second-placed Borussia Dortmund can trim Bayern’s lead when they play RB Leipzig away on Saturday evening.

In Munich, goal-scorer Goretzka praised Neuer who repeatedly denied Freiburg with a string of top-class saves.

“When you walk out onto the pitch with him in front of you, it is something special – you have 100 per cent trust in him.

“He is a absolute machine and has been world-class for years.”

Under Christian Streich, the longest-serving current Bundesliga coach, Freiburg have this season beaten Champions League teams Dortmund and Wolfsburg, plus held RB Leipzig to a draw.

Yet they failed in their bid to claim a first away win against Bayern, instead suffering a 19th defeat, plus three draws, in now 22 attempts.

“I think we only had about ten chances all game.”

One of the visitors’ best opportunities fell to Freiburg striker Lucas Hoeler, who got in behind the defence early on, but fired wide of the post.

Freiburg have the league’s best defence, which has conceded only nine goals in 11 games.

Yet Bayern took a deserved lead on half an hour when Thomas Mueller’s pass into the box was swept inside the post by Goretzka.

Freiburg held firm thereafter until Lewandowski, who marked his 100th Champions League appearance in midweek with a hat-trick in the 5-2 win over Benfica, bagged his 22nd goal of the season in all competitions.

Leroy Sane fired the ball towards goal and Lewandowski lunged to steer his shot around Mark Flekken to double Bayern’s tally.

Haberer claimed Freiburg’s consolation goal when he bet Bayern defender Tanguy Nianzou and swept the ball into the far corner.

Wolfsburg climbed to fourth in the table, three points behind Freiburg, as Florian Kohfeldt earned his third straight win since replacing Mark van Bommel with a 1-0 victory at home to Augsburg.

Former Manchester City forward Lukas Nmecha celebrated his first call up for Germany with the winning goal by heading in off the post.