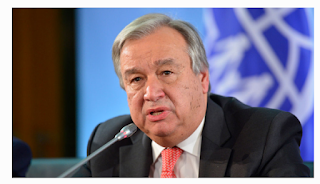 UN Secretary-General António Guterres has welcomed the announcement that China and the United States have agreed to collaborate more closely on climate action.

saying it is an important step in the right direction.

News of the joint declaration between the two countries, both major emitters of greenhouse gases, came on Wednesday at the ongoing 2021 UN climate conference, COP26, in Glasgow, Scotland.

In Paris in 2015, leaders pledged to try to keep the world from warming by more than 1.5C to 2C through sweeping emissions cuts.

In his tweet, Mr Guterres said the collaboration between China and the U.S. was in the right direction, noting that the crisis requires international collaboration and solidarity.

“There is more agreement between the U.S. and China than divergence, making it an area of huge potential for cooperation,” said China’s climate envoy, Xie Zhenhua.

U.S. Special Climate Envoy John Kerry said he was “pleased” with the collaboration, adding that “Every step matters right now, and we have a long journey ahead of us.”