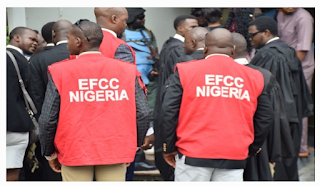 The Economic and Financial Crimes Commission (EFCC) has prayed the Abuja Division of the Federal High Court to order final forfeiture of $899,600 linked to former Bauchi State Secretary to the State Government (SSG), Ibrahim Ahmed Dandija.

Counsel to the EFCC, Ekele Iheanacho, urged Justice Zainab Abubakar to make the order, following his application for final forfeiture of the funds to the federal government.

While the EFCC is the applicant, Abdallah Suleiman, Ahmed Ibrahim Dandija and Sigma Apartments Ltd. are 1st to 3rd respondents respectively in the suit marked: FHC/ABJ/CS/1986/19.

Although the matter was formerly before Justice Folashade Giwa-Ogunbanjo, the case was reassigned to Justice Abubakar following

Ms Giwa-Ogunbanjo’s transfer to another division.

Ms Giwa-Ogunbanjo had, on October 31, 2019, granted an interim forfeiture application in respect of the funds brought by the EFCC’s lawyer, Iheanacho, through an ex-parte motion.

The money, the lawyer averred, was established to be proceeds of fraudulent activities.

He said that the commission received intelligence bordering on money laundering  regarding illicit funds  stashed at Sigma Apartment Ltd. located at Wuse, Abuja.

Mr Iheanacho said that based on the intelligence, the house was searched and a safe was found that contained the money.

He told the court that investigations revealed that the apartment was secured by a former SSG to the Bauchi State Government, Dandija, to store his valuables but that all efforts to get him were unsuccessful as he had refused to honour the invitation to explain his connection to the money.

The lawyer further revealed that Abdallah Suleiman later came forth to claim the money, stating that “he engages in chartering of aircrafts through his company Montes Auri Ltd and that the money was received on behalf of a company.”

The EFCC counsel, however, said that investigations at the Federal Airport Authority of Nigeria (FAAN) by the anti-graft agency failed to establish Suleiman’s claim.

Ms Giwa-Ogunbanjo, then, granted the prayer sought by the EFCC and directed that the order be published in a national newspaper for persons with interest in the funds sought to be forfeited to appear before the court to show cause why the final order of the forfeiture of the funds should not be made in favour of the federal government.

Meanwhile, when the matter was called before the current presiding judge, Justice Abubakar, Mr Iheanacho told the court that he had an application for “final forfeiture to the federal government of $899,600 found by the anti-corruption commission and which funds are reasonably suspected to be proceeds of unlawful activities.”

He said he was ready to proceed with the application subject to court’s convenience.

The judge then inquired from lawyers to the respondents if they had been served with the motion on notice and they confirmed, adding that they had also responded too.

Mr Abubakar then granted leave to Mr Iheanacho to move the motion.

Moving the motion, the the lawyer informed the court that he filed motion on notice dated and filed on December 2, 2019, seeking for final forfeiture of the money.

He said the motion was supported by 37-paragraph affidavit.

He urged the court to grant the commission’s plea for a final forfeiture order of the funds to the federal government.

But Ms Anazodo, after moving the application to regularise the processes, asked the court to set aside aside the earlier interim order granted for the forfriture of the funds.

The lawyer also prayed the court to compel the EFCC to return the money to the respondent.

Responding, the EFCC lawyer argued that a counter affidavit had been filed to oppose the 1st respondent’s preliminary objection.

He urged the court to dismiss the application.

However, counsel to 2nd respondent, A. O Usman, and lawyer to the 3rd respondent, Ademola Adeleye, informed the court that though they filed counter affidavits, they were not opposing to the reliefs being sought by the EFCC.

Mr Abubakar adjourned the matter until Jan. 31 for judgment.